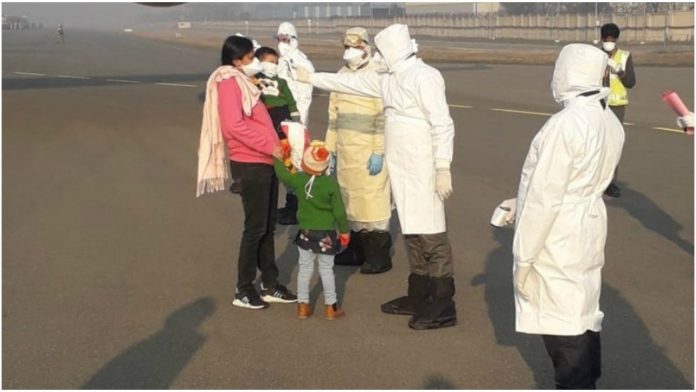 At least six Indians have been stopped by Chinese authorities from boarding the special Air India flight that evacuated 324 nationals from Wuhan amidst the Coronavirus outbreak that has killed over 200 people in China.

Reportedly, the flight from Wuhan was delayed as immigration and Chinese authorities did not allow six Indians on board after they reported high temperatures during screening. Four students and two trainees from a Shenzhen-based Chinese electronics company were stopped at immigration during their medical screening just before they were to board the New Delhi-bound aircraft.

All six had symptoms of above normal or fluctuating temperatures during the screening and were immediately asked to step aside from the immigration line. Fever, cough and shortness of breath are three key symptoms of the novel Coronavirus, a previously unknown strain.

Soon after, they were taken away to another facility for further checkups. The local authorities felt that the six Indians may have been carrying symptoms of the virulent disease. They were told their return to India would be indefinitely postponed.

“As you are aware, yesterday at the airport you were not allowed to board the flight as the Chinese authorities felt that your body temperature was of concern. As a result, we have been advised that you may be placed under observation before you are considered for repatriation to India,” confirmed the Indian embassy in China.

Two of the individuals speaking to the Hindustan Times have said that they were unaware that why Chinese authorities did not allow them. “I have been inside my dormitory on self-quarantine for more than a week. The slight rise in temperature could be for any reason. I don’t have any issue of cold and cough,” a company trainee said.

The trainee added that local Chinese officials have not shared any information about the number of days they have to be under observation. “What do we do next? What will I do for food? What happens if I actually contract the disease here?” the trainee asked.

“They said they cannot allow us to leave immediately. We need to stay in observation,” the second one among the six informed to Hindustan Times. “It’s not exactly quarantine but they will not allow us to go back to India early,” the person added.

A specially-prepped Air India Boeing 747, with five doctors from Delhi’s Ram Manohar Lohia Hospital and an Air India paramedic, landed in the national capital on Saturday morning after evacuating Indians from China.

The Indians evacuated from Wuhan have been quarantined in special facilities in Haryana’s Manesar and Delhi. The Indians will be observed for signs of infection for two weeks by a team of doctors and medical personnel.

The deadly coronavirus has wreaked havoc in China, taking the death toll to 200 and the confirmed infection cases to nearly 11,000. Meanwhile, health experts have warned that the epidemic may reach its peak in the next 10 days resulting in large-scale casualties.

The Central Hubei province is the epicentre of the virus. The novel coronavirus (2019-nCoV) outbreak may reach its peak in one week or around 10 days.