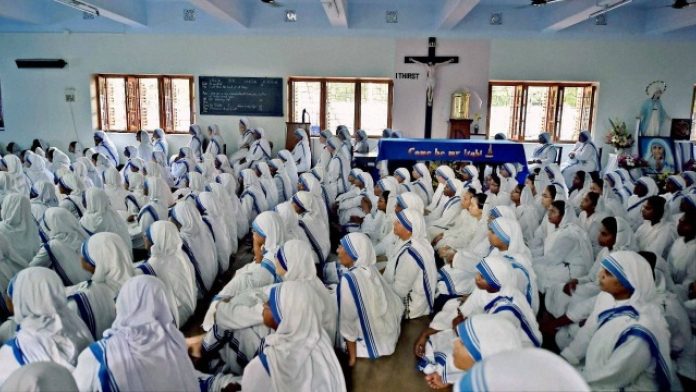 The National Commission of Protection of Child Rights (NCPCR) has moved to the supreme court seeking an SIT probe in the case of children sold by shelter homes of Missionaries of charity which was founded by Mother Teresa in Jharkhand.

Seeking a court-monitored and time-bound investigation of all such organizations in Jharkhand in order to ensure protection for children, the NCPCR moved to the supreme court under Article 32. The statutory child rights body sought enforcement of the fundamental right of the prohibition of trafficking in humans under Article 23 of the constitution.

As per the PTI report, The plea filed by the lawyer Swarupama Chaturvedi mentioned cases of child trafficking and child rights violation in Jharkhand and alleged that authorities neglected to protect these children.

The Commission also sought to SIT in every state to investigate the organizations like Missionaries of Charity who are accused of Child Rights Violations.

“During the course of inquiry by petitioner (NCPCR), shocking revelations were made by the victims which included the factum that the children were being sold in the children’s homes. These facts were emphatically brought to the notice of the state government (Jharkhand) but continuous attempts were made to sabotage and derail the inquiry,” the plea filed by lawyer Chaturvedi said.

A bench headed by Chief Justice S A Bobde and with Justices B R Gavai and Surya Kant issued a notice on Monday to Jharkhand, Arunachal Pradesh, West Bengal, Assam, Punjab, Bihar, Madhya Pradesh, Kerala, and Maharashtra state governments, tagging the matter related to the protection of child rights in school.

The plea stated that the NCPCR raised the issue by writing to Cheif Secretary of Jharkhand, seeking information with regard to various questions like total number of Children at the shelter homes and their legal status as to whether they are orphan/abandoned/surrendered and the legal information about the shelter homes whether they are registered and the action taken against nuns for child trafficking.

The plea said that the NCPCR had visited a center of Missionaries of Charity at Ranchi and found gross irregularities in their functioning, which was later conveyed to Chief Secretary and DGP of Jharkhand.

The plea complained that on 10 July 2018, Additional Secretary of Department of Women and Child development and social security of Jharkhand government responded to the queries raised by NCPCR, but the details were found to be with certain discrepancies and the NCPCR found it as unsatisfactory. They received information about 78 child care institutions instead of the actual number of 80.

Citing another incident in Dumka districts in Jharkhand where they were provided statements of two girls who were sexually abused, were sent to missionaries of charity where they delivered babies and returned to their respective homes with their babies. The commission alleged that except for the statements of the victims no action has been taken by the authorities.

The commission concluded saying, “Fundamental right of the prohibition of trafficking of human beings guaranteed under Article 23 of the Constitution cannot be trampled in any manner and it includes the protection of children from trafficking, child prostitution, and other related offences without any hindrance.”

Such people should be discouraged, must not be given importance: Union Minister Mahendra Nath Pandey on Asaduddin Owaisi and Waris Pathan