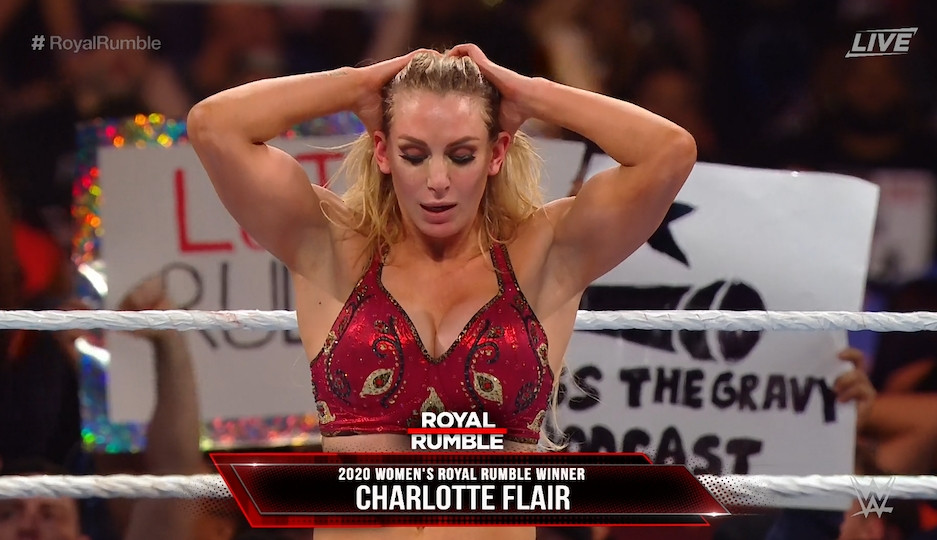 There were only seven women announced for the Women’s Royal Rumble match: Charlotte Flair, Natalya, Alexa Bliss, Nikki Cross, Carmella, Dana Brooke, and Sarah Logan. Nevertheless, we knew most of the women on the main roster would be involved, so it wasn’t really a surprise to see Liv Morgan, Lana, Kairi Sane and so forth. It was a bit surprising, on the other hand, that we didn’t see Sasha Banks in the match at all. Naomi made her WWE return, however, showing off her natural hair and playing a major role in the match. Tamina also made a return, as well as Molly Holly, Beth Phoenix, and Kelly Kelly.

NXT Superstars played a huge part in the match, starting with Bianca Belair, who came out at #1 and got the match going alongside the #1 entrant, Alexa Bliss. Bianca outlasted Bliss, and was there for the bulk of the match, until she was eliminated by Charlotte Flair. The other NXT women who took part in the match without making it to the finish were Mercedes Martinez, Candice LeRae, Mia Yim, Dakota Kai, Chelsea Green, Toni Storm, Shotzi Blackheart, and Tegan Nox.

Late in the match Santino Marella entered dressed as his feminine alter ego, Santina. That’s a pretty embarrassing spot for all involved in 2020, but to his credit he seemed to realize how embarrassing it was and quickly eliminated himself.

Finally, Shayna Baszler entered the match at #30, and it quickly became about her and Charlotte. It really seemed like Shayna might win the match, but even as Charlotte was hanging off the top rope to the outside, she managed to grab Baszler with her legs and flip her out onto the floor instead, thus winning the Rumble.

In a brief post-match interview, Charlotte simply said that she won the Rumble to remind everyone that she’s the best.

Still, Shayna Baszler and Bianca Belair tied for the most eliminations ever in a Women’s Royal Rumble, with 8 apiece, so there may soon be some new female stars making their names on the main roster of WWE.