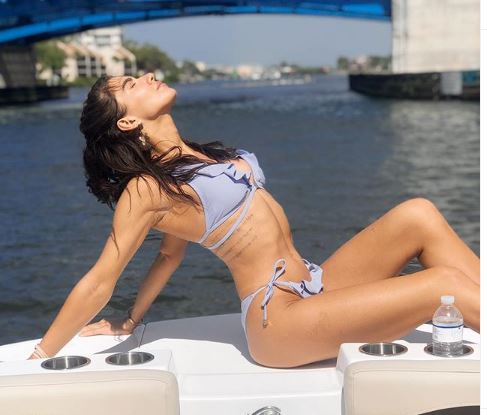 Mumbai: Actress Scarlett Mellish Wilson, who is best known for her role in ‘Baahubali: The Beginning’, has flooded her Instagram page with some of her captivating pictures.

English dancer and model Scarlett broke many hearts when she tied the knot with Mr India 2008 Pravesh Rana. Scarlett and hubby Pravesh were dating each other for quite some time and the couple decided to get married in 2016.

She is best remembered for raising temperatures with her item song in ‘Shanghai’. Apart from Bollywood, she has also worked in several South Indian movies like ‘Yevadu’, ‘Chandee’ and ‘Prem Adda’. Scarlett actually began her career with the TV show ‘Chak Dhoom Dhoom’.

She has also participated in the dance shows ‘Jhalak Dikhhla Jaa’ and ‘Dare 2 Dance’. Scarlett is a trained dancer and has been dancing since she her childhood. She moved to India in 2009 and began her modelling career.

Blessed with great looks and enviable figure, Scarlett is often grabbing all attention for her bold bikini and swimsuit pictures from her beach vacation. She never shies away from showing off her bold side. Scarlett Mellish Wilson made headlines in 2017 when she slapped co-actor Umakant Rai on the sets of ‘Hansa – Ek Sanyog’ for his vulgar gestures.