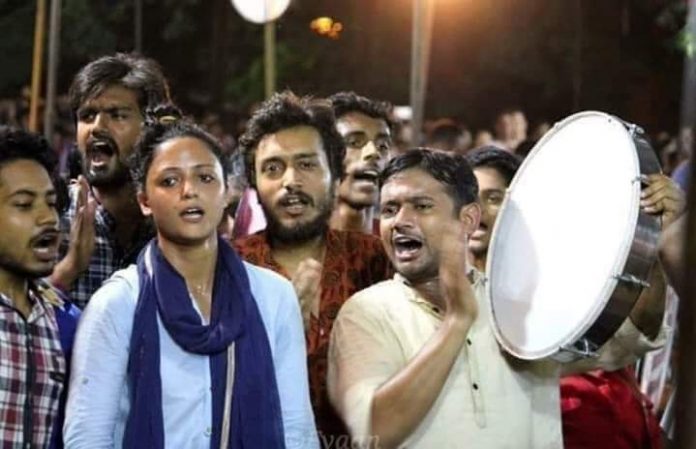 An unusual incident has come to the fore that highlights the extent of polarization in society today and the extent to which communists and liberals are out of touch with the ordinary citizens of this country. Kavita Krishnan, a certified Communist and known Naxal-sympathizer narrated a story on Twitter about how one of her comrades, a poet Bappadittya Sarkar who goes by the Twitter handle @bappadittoh, got dragged to the Police Station by a Uber Driver.

Kavita Krishnan said that Bappadittoh had a “scary episode” in Mumbai during a ride on Uber on Wednesday. She shared screenshots of texts, reportedly from the poet that told exactly what transpired that night. According to Krishnan, it is “a glimpse of scary India under NPR NRC CAA, where every person will be incentivised to suspect & turn in others & police can harass everyone.”

As per the screenshots, Bappadittoh booked a cab from Silver Beach, Juhu to Kurla. During the ride, he called one of his friends and they started talking about the protests in Shaheen Bagh, “people’s discomfort with Lal Salaam” and what they could do to make the protests in Jaipur ‘more effective’. Not too long after, the Uber driver allegedly asked him if he could go to an ATM, to which the poet readily agreed. However, the driver came back with two policemen and it was only then that Bappadittoh realized that the driver had taken him to a police station.

The policemen asked Bappadittoh where he was coming from and why was he carrying a Dafli. Dafli is the most popular musical instrument among Communists. He replied that he was carrying the Dafli because he was sloganeering at ‘Mumbai Bagh’ earlier in the afternoon. The driver then said, “Sir, arrest him. He was talking about burning the country, was saying that he is a communist and will turn Mumbai into Shaheen Bagh. I have the entire thing recorded.”

It is notable here that the so-called ‘Mumbai Bagh’ is a term used by so-called ‘left-liberals’ for a road in Mumbai’s Nagpada area that has been blocked by hundreds of Muslim women trying to mimic Delhi’s Shaheen Bagh in the name of protests against CAA.

Bappadittoh further claimed that he asked the policemen to listen to the recording and arrest him if they found him saying “We will burn the country” or “anything that is inciting or can be perceived as anti-national”. He asked the Uber Driver why was he hurt and why had he dragged him to a Police station.

The Uber Driver responded, “You’ll speak of destroying the nation and we will remain silent? I could have taken you anywhere else, be grateful that I brought you to a police station.” Bappadittoh then texted a few of his friends and sent them his live location. According to the poet, the driver kept yelling at him throughout. The Police then questioned him about his ideology and the people he read. The policemen then proceeded to record the statements of both of them.

As per the screenshots, Bappadittoh told the Policemen that he had been invited to read at Kala Ghoda and he was asked to give them the email of his organizer but he refused even though he did give them the first name. ‘Comrade’ S Gohil arrived at around 1 a.m into the night and he was let go soon after. Bappadittoh said that the Police were polite throughout the inquiry and advised him to not carry a Dafli around as these are troubled times we are living in. However, still feeling unsettled, they moved to a different place to stay.

Krishnan, however, did not stop at just naming and shaming the Uber driver and Mumbai Police. She went on a full-blown fear-mongering rant, claiming that her friend was ‘targeted’ because he spoke Bengali. Despite the poet asserting that at no point he was threatened or in any way misbehaved by the police, Kavita had her communist narrative to peddle, so she wondered whether the police have treated him in the same manner if he had been a Muslim or ‘recognisably Dalit or Adivasi’.

As expected, communists and liberals are screeching intolerance about what happened to Bappadittoh. However, they didn’t have any such problem with it when Arnab Goswami got heckled by alleged comedian Kunal Kamra mid-flight. In fact, they were cheering for Kunal Kamra. They had also cheered when journalist Mahesh Vikram Hegde was heckled at the airport and harassed by three women at the airport. They even support the heckling that certain journalists have faced at Shaheen Bagh. Liberals and Communists hadn’t found anything problematic with nationalists being abused and harassed for their ideology. It appears they have a problem only when they have to suffer the consequences of their own tactics.