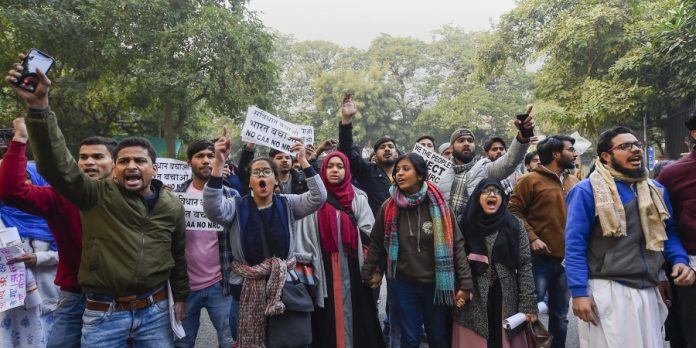 It would appear that there is a curious and enforced intermingling of the anti-CAA protests and the Delhi Assembly polls that will be held a week hence. Prime Minister Narendra Modi provided an icing on the cake by saying there was a political design behind it and that the protests aimed at “dividing India” into pieces.

The campaign scenario in recent days was building up on similar lines. Union minister Prakash Javadekar added his mite to the poll campaign by saying BJP’s principal rival at the hustings in the Capital, CM Arvind Kejriwal is a terrorist to the extent that there was not much of a difference between an anarchist, which Kejriwal claimed himself to be once, and a terrorist. Uttar Pradesh chief minister Yogi Adityanath too allegedly ‘provoked’ his party supporters in Delhi by saying, “When talks do not help, bullets have to be used.” The reference might be to the scenario in his own state where the police opened fire on anti-CAA protesters, but a link was quickly made between instances of pro-BJP-RSS men opening fire near the Jamia Millia and Shaheen Bagh protest sites in Delhi. Union minister Anurag Thakur also added his own belligerence to the Delhi poll campaign on communal lines.

While the Prime Minister accused the Congress of using the protests to communally divide people with the implicit purpose of getting minority votes and winning elections, the other side of the political spectrum is accusing the PM and the ruling BJP of the same. The Prime Minister’s statement on Monday about his political rivals’ plans to divide India has an indirect reference to Pakistani agencies supposedly acting in cahoots with the anti-CAA protesters to fan trouble in India. Whether Pak has agencies capable to play such mischief within India is unknown. Hopefully, the Indian Intelligence community would be aware of any deeds detrimental to the country’s interest and must have taken counter measures to thwart them. The PM stating about it publicly might have been a part of that strategy. Alternatively, it could be a political hoax to confuse Delhi voters away from real issues.

The Delhi state polls should normally be fought on local issues. Kejriwal has a report card of helping the poor segments of the population in the national capital through state interventions, mainly in the health and education sectors. At the same time, the capital’s wider interests like infrastructure development, which would require huge support from the Centre were not effectively addressed by the BJP government. The recent Budget also showed utter neglect towards most non-BJP ruled states, especially Delhi. Kejriwal’s grant of free ride to women on Delhi public transport has managed to give an edge to his campaign. How all these sops will play out in the voting machine against the Hindoo tirade in a cosmopolitan Delhi is yet to be seen.