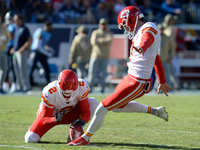 Tarvarius Moore’s interception early in the fourth quarter of the Super Bowl seemed at the time to serve as further preamble for a 49ers championship victory.

Instead, it was really the last highlight for the 49ers ahead of a what has quickly become a legendary Chiefs comeback.

In the eyes of Kansas City kicker Harrison Butker, Moore’s interception served as fuel for the comeback.

With the 49ers leading the Chiefs, 20-10, Moore’s pick was followed by a defense-wide celebration in the end zone.

ANOTHER PICK FOR THE @49ERS DEFENSE! #GoNiners

“Probably that celebration that they had,” Butker said Friday on NFL Total Access when asked what he remembered most about the Super Bowl. “I know it’s going around on social media. I don’t know what part of the game it was, but they went up, probably by, I guess 10, when they scored the touchdown. And the whole team’s celebrating in the end zone. It might’ve been after an interception. I just felt like the whole mood in the stadium was you know ‘the 49ers won the game.’ That probably helped to our advantage that they were celebrating so much and I think they probably let their guard down a little bit. When you have Patrick Mahomes and our offense, you know we’re gonna score quick — which we did. Defense did a great job and before they knew it, we’re up four and then we’re up 11. But that was kinda sticking in my mind.”

Thereafter, the next three Chiefs possessions ended in touchdowns that equated to Kansas City’s 31-20 win over San Francisco.

A comeback for the ages fueled by a most forgettable and premature celebration.