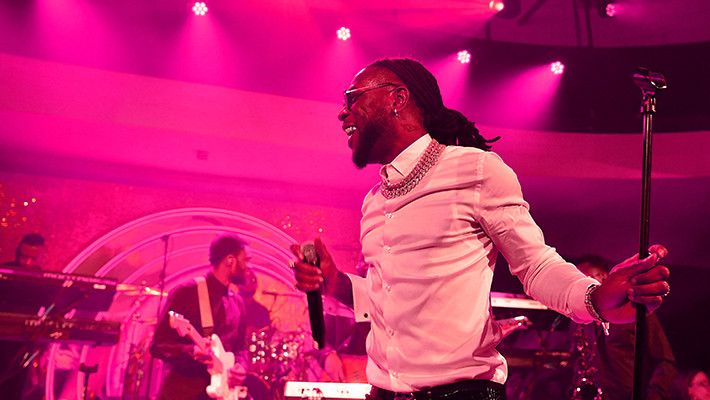 In less than a year, Nigerian superstar Burna Boy parlayed a quip at Coachella into a critically-acclaimed, record-breaking Grammy-nominated album, African Giant.

Burna Boy, née Damini Ogulu, has experienced an ascension that has been less meteoric and more piecemeal — marked by defining deterrents and gradual wins. His Best World Music Album Grammy nomination comes at no surprise to the fans and onlookers who have been following the 28-year-old afro-fusion artist’s rise over the better half of a decade. This development in the Afropop protagonist’s career represents the climax in a coming-of-age success story of one of Africa’s most successful artists of today.

As afrobeats/afropop surges into the sphere of American pop music, a slew of issues arise. In this crucial moment, what has remerged is the battle for visibility, validation, and respect.

Burna Boy’s Grammy nomination and loss mark a monumental moment in Afropop history while simultaneously revealing the award show’s flawed system — underscoring the longtime issues with the category and term “world music” and the implications of the Recording Academy’s role in upholding the confusing, controversial classification.

Burna Boy was expected to take home the award given his track record this past year but lost to the legendary Beninese singer-songwriter Angélique Kidjo, whom the Grammys has nominated and awarded a handful of times. During her acceptance speech at this year’s awards, Kidjo dedicated her award to Burna saying, “The new generation of artists coming from Africa are gonna take you by storm… Burna Boy is among those young artists that come from Africa that is changing the way our continent is perceived.” Her words affirmed that the Grammys can’t eclipse just how paramount of a role African artists are playing in the reinvention of popular music and the recalibration of how and what the world hears.

This was barely a loss for Burna, who has sampled Kidjo’s music and was graced with a feature from her on his nominated album. Though Kidjo and Burna are from different countries, different generations, and make different styles of music, they are both important African artists whose work should be honored respectively and respectfully. And if the Recording Academy recognized diversity outside of race or gender — where they’re still failing — and allowed for the nuances of style, genre, and regions as well, maybe both artists could have received proper recognition for their contributions to music this past year.

The Grammys are not thoroughly engaging in the current scope of music from around the world. ‪There isn’t one singular global sound, so the world music category can’t possibly encapsulate what’s happening in the world. But where did it even come from?

The Recording Academy instituted the World Music category in 1992. Ironically — but in some ways, on-brand for the Grammys and its flawed voting process — the first World Music award was given to an American artist. Mickey Hart, a member of the rock band Grateful Dead won the award for his 1991 album, Planet Drum — a project featuring percussionists from around the world. But the first African artist to win the Best World Music Album Grammy was Malian legend Ali Farka Touré for his 1994 album Talking Timbuktu, a collaboration project with American musician Ry Cooder, who had won a Grammy in the World Music category a year prior. More African acts including South Africa’s famed choral group Soweto Gospel Choir, Ladysmith Black Mambazo, and Angélique Kidjo would go on to win.

American ethnomusicologist Robert E. Brown coined the term in the early 1960s, but it was later popularized in the 1980s as a marketing category in the media and the music industry intending to encompass different styles of music from outside of the Western world. It is by and large a determination of any type of genre or sound that Westerners consider ethnic, indigenous, folk, or simply non-American music. And then there’s the advent of digital music production, which threatened the original definition of world music that sought to instill an authenticity identifier and distinction between indigenous music traditions and modernized, digitized pop music.

The term highlights the Western obsession with “authenticity” anchored by residual effects of cultural colonialism without challenging who is placed in the position of power to police what is being classified and othered ex-cathedra by a notoriously rigid pool of Academy voters. A sexual harassment and gender discrimination complaint filed this month by former Recording Academy president and CEO Deborah Dugan revealed a recent task force on the board to be 68% male and 69% white, supporting speculation and criticisms about outdated rules and out of touch voters contributing to voting irregularities and discrimination. The provincial parameters of the term world music introduced non-Western music to Western audiences as “exotic” imports. Under this framework, America functions as the nucleus of music while the rest of the world’s vast and varied genres exit on the periphery. The result is what can be seen at this year’s Grammys, in which Burna Boy — whose amalgam of Afrobeat, dancehall, hip-hop, pop, R&B, and reggae forms what he refers to as afro-fusion — is lumped into the same category alongside Altın Gün, a Turkish Psychedelic Folk band. ‪

There is a lingering question of whether or not this category should even exist, as it makes little sense to jumble non-American artists from a range of different genres into a welter of a poorly defined category that’s been critiqued since its inception. There is an adjacent argument that the music coming out of Africa is easily diverse enough to warrant their own categories at the awards, similar to the way that multiple Latin music categories exist within the Grammys.

Another criticism specific to this year is that Burna Boy’s album could have fit into a different category. Being that Beyoncé’s Lion King: The Gift album is nominated for Best Pop Album, and Burna is featured on that album (not to mention, he’s the only solo feature on it), and other African artists who helped weave together the album’s soundscape, it appears that the Academy considers Beyoncé’s afropop album an American pop album as opposed to a world music album and considers afro-fusion album African Giant, which features a slew of American artists, a world music album. The public reception of Lion King: The Gift and these nominations brought into question arbitrary and continuously convoluted stipulations for classification while underscoring America’s limited scope of understanding of non-American cultural productions.

The standards by which Grammy rules are applied to categorize many international genres and artists are what has made the world music title historically questionable. In a 1999 NY Times piece, “Crossing Music’s Borders In Search Of Identity; ‘I Hate World Music’,” David Byrne writes that world music could be viewed as “a musical utopia” in which all music is equal regardless of genre or sales, the term still “groups everything and anything that isn’t ‘us’ into ‘them.’ This grouping is a convenient way of not seeing a band or artist as a creative individual, albeit from a culture somewhat different from that seen on American television. It’s a label for anything at all that is not sung in English or anything that doesn’t fit into the Anglo-Western pop universe… It’s a none too subtle way of reasserting the hegemony of Western pop culture.”

But the Grammys have never been the most accurate representation of what’s happening at music at large. The occurrence of African artists seeking Western validation of their art by and through American institutions like the Grammys or Coachella should be viewed as less of an indictment on them and more of a material consequence of the colonial power dynamics that permeate every scope of society and culture. The default formula for success that international artists are subjected to culminates in an inevitable crossover; a requisite for a particular type of success.

In his 1993 book, The Black Atlantic: Modernity And Double Consciousness, Caribbean British academic Paul Gilroy examines London’s transformative music scene as a direct result of shifting cultural demographics, writing, “We are moving towards an African majority which is diverse both in its cultural habits and in its relationship to colonial and postcolonial governance.” Gilroy describes a modernized sociocultural space that is not solely American, African, Caribbean, or European, but rather a combination of them. Nearly 30 years later, Burna Boy exemplifies this new world order, among the pantheon of modern pioneers subverting the familiar and creating something fresh.

Burna Boy is among an esteemed list of Nigerian artists nominated for Grammys that continues to grow, but his nomination tasked audiences with tackling the question of where afro-fusion and other African genres fit into American pop culture as they continue making waves. Regardless of the warranted critique, the Grammys still hold weight; the types of accolades, access, and acclaim artists receive as a result of winning or losing awards are a reality of this power and prestige. Acknowledging the tangible benefits the Grammys can bring to musicians and movements isn’t mutually exclusive with questioning the validity of the institution and whether or not its inconsistencies and antiquated frameworks help or hurt artists and genres in the long run.

If the Grammy’s were never the best barometer for popular music in America, it’s a wonder what makes people think, or rather hope, that it will be able to get it right for artists from the rest of the world. But to artists looking to quantify the value of their work in the only way they’ve been conditioned to aspire to, despite the reality of its flaws, the Grammys still bears influence on their careers and how music history is documented. They matter in the most complicated ways.

Burna remains one of the moment’s most successful African artists and the Grammys don’t dictate or define his cultural significance or the broader movement that is continuing to take the world by storm. This year’s Grammys was a chapter of this collective success story. Both Burna and Kidjo and those who succeed them can flip the script and possibly play a role in redefining the legacy of an institution that is wholly credited in defining the legacies of artists.

International acts like Burna Boy have their fingers on the pulse of what’s popular, continuing to shape and advance music beyond category constraints. He touched the global stage while remaining devoted in presence and purpose to his native land while continuing to inspire a new generation of creators from the continent to do the same. Artists following in his footsteps will go on to blaze uncharted paths of their own that shine brighter than any gilded gramophone could, because Grammy or not, it’s still “Africa to the world.”