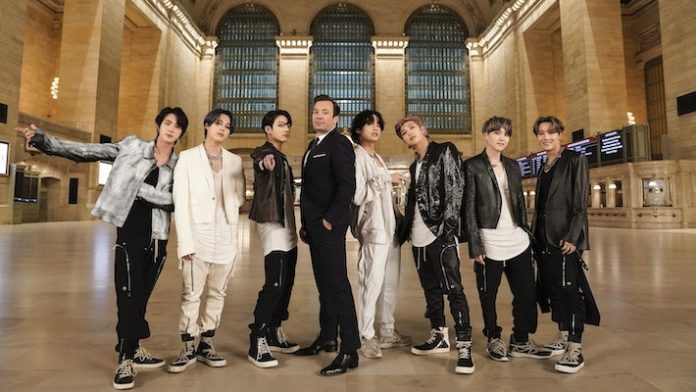 BTS fans have been eagerly awaiting their appearance on Fallon Tonight, and after an interview on an empty subway car — where the crew revealed how much they want to meet John Cena — the crew arrived at Grand Central Terminal for a pretty epic performance. The group selected “On” off their new album, Map Of The Soul 7 for the special one-off rendition in New York.

After being introduced by Jimmy, the band started dancing with a whole phalanx of of backup dancers weaving in and out of formation behind them. Later, some of the dancers grab drums and form a marching band, and all the while BTS sing and rap their way through the song. For the potential viewers who haven’t seen BTS before or been to one of their massive stadium shows, this kind of theatrics is par for the course — they are pop stars in every sense of the word.

Currently gearing up for an international tour behind Map Of The Soul 7, this group is just going to become bigger and bigger as 2020 goes on. While America and the rest of the western world has been behind the curve on K-Pop, after tonight, we are definitely caught up on the magic. Watch the performance above.