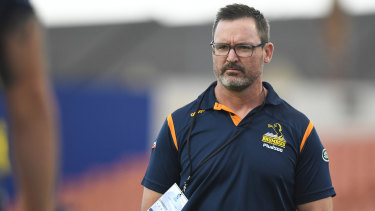 Brumbies coach Dan McKellar is in talks to quit Canberra and join the Wallabies as Dave Rennie’s forwards coach and his likely successor.

Despite re-signing with the Brumbies until the end of 2021, the Herald can reveal that Rugby Australia has approached the Brumbies about recruiting McKellar to work under Rennie.

Bombshell: Dan McKellar is in talks to join the Wallabies Credit:AAP

While no deal has been secured and McKellar is said to be undecided, the move would see the Queenslander leave the Brumbies, where he has been head coach since Stephen Larkham’s departure at the end of the 2017 season.

Senior Australian rugby sources have told the Herald that RA director of rugby Scott Johnson has pitched McKellar with a plan to apprentice under Rennie for the term of his four-year deal before taking over as Wallabies coach after the 2023 Rugby World Cup, all going well.

That scenario will ring alarm bells for Brumbies fans, who remember that Larkham was also anointed “next Wallabies coach” when he joined Michael Cheika’s set up as attack coach in 2015. Larkham balanced his Brumbies and Wallabies roles for three seasons before joining Australia full time for the 2017 Test season. After ongoing poor Test results, Cheika sacked Larkham at the end of 2018.

The RA and Wallabies set-up is wholly different now, with Johnson in the director of rugby role and in charge of long-term planning within the Wallabies. He also has growing influence among the Super Rugby franchises, having helped recruit a number of assistants.

Nevertheless, the news will go down like a lead balloon in Canberra, where McKellar and his assistants have cemented the Brumbies as the most consistent and successful of the Australian sides.

They made the semi-finals last year and are top of the Australian conference with three wins and one loss so far this season. McKellar has been considered for the past two years a Wallabies coach in waiting.

Rennie and Johnson have been searching for some time for a forwards coach or coaches to fill the final vacancy in the Wallabies set up.

Matt Taylor (defence) and Scott Wisemantel (attack) are up and running but the hunt for a forwards coach has taken much longer, with McKellar’s assistant Laurie Fisher and former Reds coach Nick Stiles both approached over the past four months. New Zealanders Neil Barnes (Chiefs) and Tom Coventry (Blues) have also been linked to the role.