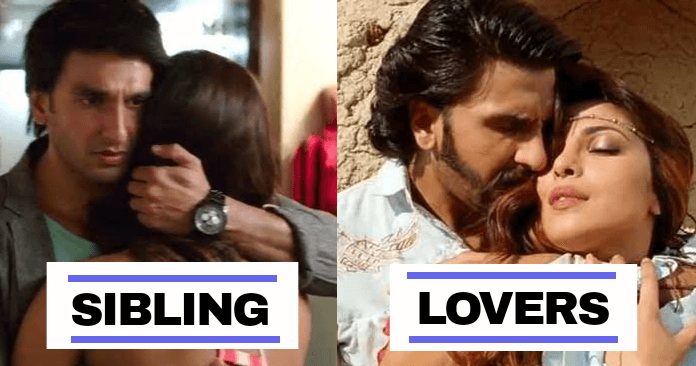 Bollywood is one fun place to show the relationship, and this is proof that all they do in front of the camera is a part of their work and nothing more.

These Bollywood actors have made sizzling pair with each other in a romantic film, but in another movie, they were seen helping each other as siblings.

Check out these 11 Bollywood pairs who have romanced each other as well as played the siblings on screen.

In both the movies, they won the heart of the audience with their amazing acting skills and show great equation with their co-star that made everyone awkward.

Ranveer Singh and Priyanka Chopra show intense chemistry when they came together for any film. They had done 3 films together and share 3 different relations.

They were dating in movie Gunday, and then they were cast as Siblings in the ‘Dil Dhadakne Do’ directed by Zoya Akhtar.

In the same year, Ranveer Singh was seen with Priyanka Chopra in the movie Bajirao Mastani where they played husband and wife.

In the very first movie of Deepika Padukone, she played the role of Arjun Rampal’s wife. Remember the ‘Om Shanti Om’ that hit theatres back in 2007.

In 2010, Deepika featured in Housefull with Arjun Rampla again where they played brother and sister.

Asin and Abhishek first came as brother and sister in the movie Bol Bachchan directed by Rohit Shetty.

However, after that, the duo of Abhishek and Asin featured in another movie ‘All is Well’ where they play the couple.

Deepika Padukone is back on the list again. She has also shared the screen space with John Abraham as a romantic couple as well as a brother-sister bond.

Shah Rukh Khan is very popular for portraying romantic roles. Well, he was featured opposite Aishwarya Rai in many movies like Mohabbatein and Devdas.

However, they impressed the audience with their bother sister bond as well in the movie Josh.

Tusshar Kapoor, when he started his career in Bollywood, got many roles in movies. One of his movies named Mujhe Kuch Kehna Hai where he romanced Kareena Kapoor.

However, Tusshar didn’t get much success in his Bollywood career. Years later, he featured in the Golmal returns playing the sibling of Kareena Kapoor.

However, these actors appeared in another movie ‘Hum Saath Saath Hain’ where they played brother and sister.

Sanjay Suri and Juhi Chawla appeared together sharing screen space in two movies. The first one is Jhankaar Beats where they played the role of husband and wife.

They came together as brother and sister in the movie My Brother Nikhil.

Amitabh Bachchan and Hema Malini make one of the most superhit couples in Bollywood. They have seen romancing each other in various movies like Naseeb, Desh Premee, Nastik, Babul, Satte Pe Satta, Baghban, and Veer Zaara.

However, one of the most celebrated movies in Bollywood named Hare Rama Hare Krishna showed us the sibling equation of Dev Anand and Zeenat Aman.

Daisy Shah made her Bollywood debut with Jai Ho opposite Salman Khan. She played the love interest of Salman Khan in the movie.

However, a few years later, she was offered the role in Remo D’Souza’s Race 3 where she played the role of the younger sister of Salman Khan.

We can say that Bollywood is a funny place and what you see in the cinema is not real at all. These actors are good with their works and perform the character with their 100 percent efforts whatever role they are offered to.