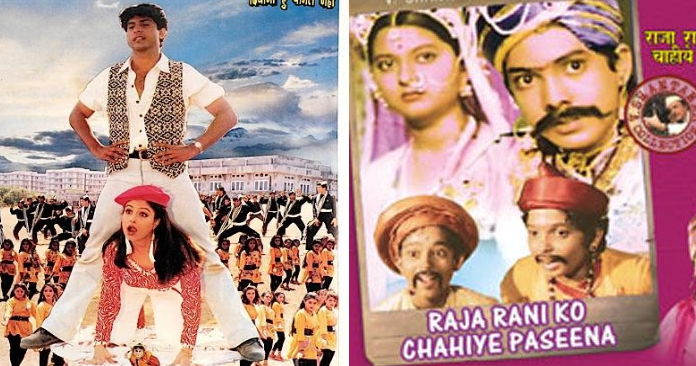 Bollywood movies sometimes suck but do you know that there’s a problem with movie titles as well. Since filmmakers are not thinking much with the title of the movie, or they are very unique and creative with the ideas of presenting the title, the audience has trolled them for this reason.

If you are a die-hard fan of Sallu Bhai then you will surely understand the title of this movie. Similar to Dil me aata hu samaj me nahi, ‘Deewana hoon Pagal nahi’ is a love story from the perspective of the hero.

Can you believe that there’s a movie named Dilruba Tangewali? It must be a spin-off of Basanti and Dhanno arc in Sholay with a different cast. The movie is available on YouTube.

Back in 1991, there’s a movie named Bhediyon ka Samooh (pack of Wolf). This is certainly not related to twilight and certainly not an Indian version of Twilight as well. It’s about a hero who gets trapped in a vicious criminal connection.

In 2001, a movie comes out with such an intriguing title. The movie is about a woman getting married to a corporate guy but finds that her own sister is seducing her husband. The movie might be a good Bollywood drama but the title is really hilarious.

Before Remo D’Souza revolutionized the dance films. There was one in the Bollywood starring Halen. And the movie was so focused on dance that its name Jal Bin Machhli Nritya Bin Bijli.

It is one of the Bollywood’s action movie with such an intriguing title. This movie features Rajendra Kumar in the lead role. I just thought it would be the premise of an Indian version of Iron Man.

One of the comedy movies starring Kadar Khan titled as Allah Meharbaan Toh Gadha Pahelwan. This movie is about the election that is contested between 3 parties, and I’m not spilling the beans to avoid spoilers. Ha Ha Ha.

In recent years there a movie based on the Punjabi theme titled Luv Shuv Tey Chicken Khurana. This title is very hilarious as it focused on opening a restaurant and of course the love story.

Can somebody understand the title and what movie premise would be? If you are watching a movie named Murde Ki Jaan Khatre me then prepared for the adventure. Well, the story focused on a dead body which by her girlfriend pretended that he is alive.

A Bollywood drama film that follows a story of a young mind who wants to become rich. This movie shows community riots and many other things however the most interesting thing is the title of the movie.

The story is focused on the man who took money from the various moneylenders and due to the failure in repayment, the man married to a rich girl. This can be a typical Bollywood movie. However, the title of the movie is pretty fascinating.

Back in the 80’s, Dada Kondke movies are very famous for making movies that are filled with dual meaning dialogues. One of those films titles Andheri Raat Mein Diya Ter Haath Me and we all know what it is indicating.

There’s a movie in 70’s Bollywood that is really ahead of its time. I dare you to guess the movie plot by just reading the title of the movie. If somebody asks then I will answer in the comment box. The story doesn’t matter but the title is definitely hilarious.