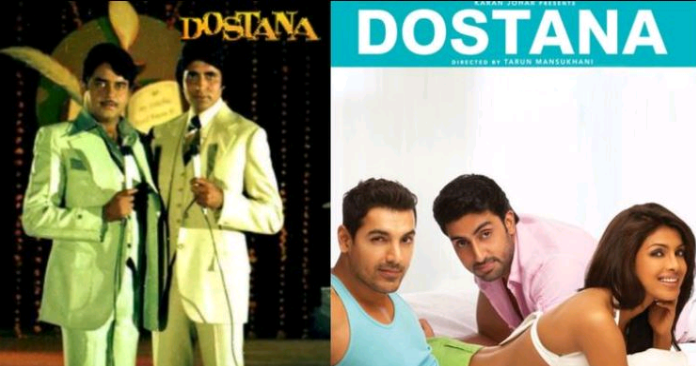 Hello Readers! Lately Bollywood has been really falling short of good content to keep the viewers engaged with them. The new movies that have been releasing nowadays are failing to come up with some new and innovative titles that would drag the audiences into the theatres. So they’ve been using the same old titles from some hit movies back from the 90s to engage us with their content. But these movies had nothing in common, in fact they were poles apart from what we’d expected. So without wasting any more time let’s take a look at those movies right away.

Here’s a list of all the 10 movies that share the same name but had completely different stories from each other!

The first “Hera Pheri” that starred two blockbuster heroes, Vinod Khanna and Amitabh Bachchan was way different than the “Hera Pheri” that released in the year 2000 starring Akshay Kumar, Paresh Rawal and Sunil Shetty. This was a comedy movie unlike the old one.

These two movies are also poles apart and had way different stories. Maybe both these films were based on the very same concept, that was “invisibility” and had the same titles. But their concept and plot was nowhere the same.

The “Agent Vinod” starring Mahendra Sandhu was a big hit and was an action spy film. This movie received tons of success and fame and so when this title was again used in 2012 for Saif Ali Khan’s movie, everyone thought it to be a remake. But it wasn’t and had a completely different outtake.

The 1990 film “Baaghi” starring Salman Khan was a big hit and gained enormous success and as the actress in the film was just 15 year old, the viewers took more interest in watching the film. The recent “Baaghi” movie starring Tiger Shroff also had the same tag line and title, but besides that there wasn’t anything more in common.

The 1951 film “Baazi” starring Dev Anand was one of a kind and the audience really loved this film and were totally engaged to it. But the other “Baazi” starring Aamir Khan was nothing much but disappointment.

The 1994 film “Dilwale” was a blockbuster hit and our audiences still love to watch this film. But when Shah Rukh Khan used the same title for his movie in 2015, it didn’t really help the film that much and was an average watch for the viewers.

The Amitabh Bachchan starrer film “Dostana” was basically about a love triangle between two best friends. While the other Dostana starring Abhishek Bachchan, John Abraham and Priyanka Chopra had a different message other than the love triangle one.

Both the films were really great and made us roll on the floor with their comic content. Yes, the genre of these films were same but if you’ll watch it, you’ll know how different their stories are.

The 1999 film “Khoobsurat” was really Khoobsurat as it’s title but the other “Khoobsurat” which released in 2014 starring Sonam Kapoor and Fawad Khan wasn’t really a joy for us.

Long before we saw the iconic film “Mother India” starring Nargis and Sunil Dutt, we also had another film with the same title which released in 1938.