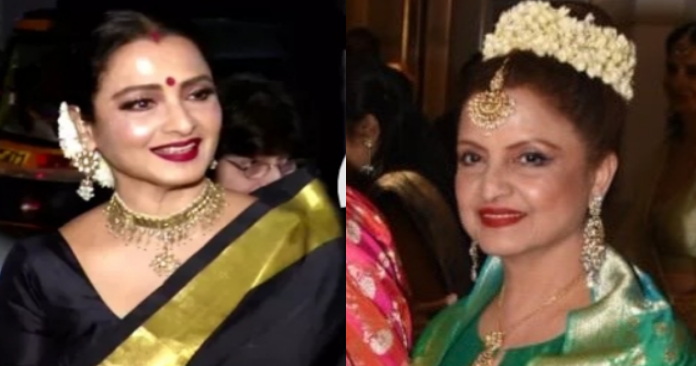 You have always seen the glamorous Bollywood Diva Rekha all alone in award functions and Bollywood parties. Well… the actress who lives alone in her private life has a really big family. For the record, she has 6 sisters. All the sisters of Rekha are, much like her, pretty popular in their work field.

Rekha has millions of fan due to her beauty, acting skills, and her contribution to Bollywood Cinema. Despite the fact that she didn’t appear in any Bollywood movies for a long time, still, she manages to be in newspaper headlines. She can easily get spotted in various award shows and other Bollywood events.

We all are well aware of the fact that she lives alone and hadn’t married yet. She never disclosed publically whether she was married or not. But do you know that Rekha belongs to a big family, and she has 6 sisters? Check out the whole story to know the wholesome family of Rekha who are very popular in their respective fields.

You must know the fact that Rekha was not having a good
relationship with her father, but she is very friendly and family with her brother
and sisters. Note down the list of Rekha’s sisters…

1. Dr. Jaya Shreedhar, a doctor also works as a health advisor with Inter News Network, is the youngest of seven daughters of Gemini Ganesan.

2. Dr. Revathi Swaminathan, The eldest sister of Rekha named Revti Swaminathan is a well-established doctor in the USA. She is a radiation oncologist practicing in Illinois, USA.

4. Vijaya Chamundeswari is an Indian fitness expert. She is the daughter of Savitri and a step-sister of Bollywood Diva Rekha.

5. Radha, sibling
of Rekha has done a fair share of work in the South Film Industry before
getting married. She stopped appearing in movies after the wedding and got
settled with her husband.

To see Gemini Ganesan’s 7 daughters together is a rare sight
if you are a fan of Rekha.

In December 2004, when Gemini Ganesan was very ill, all the
sisters made it a point to come to Chennai and nurse their father together.

They met again in February 2005, at Apollo Hospital in Chennai. Rekha was to inaugurate the Apollo Wellness Clinic, and all the sisters of Rekha came together for the even except her sibling Radha.

“Though Appa was unwell, we had some good moments when we met in December. People may assume that there are strained relationships because we don’t share the same mother but there is nothing like that,” Jaya commented while answering questions about their family bonding.

“We are professional women, and over the years,
have learned to appreciate each sister for what she is. We did not have
the pleasure of growing up together. In fact, between my own elder sister
Revathi and me, there is a 20 year age difference. Appa was very
happy to have all of us together. This was a kind of pleasure he never had when
we were young.”