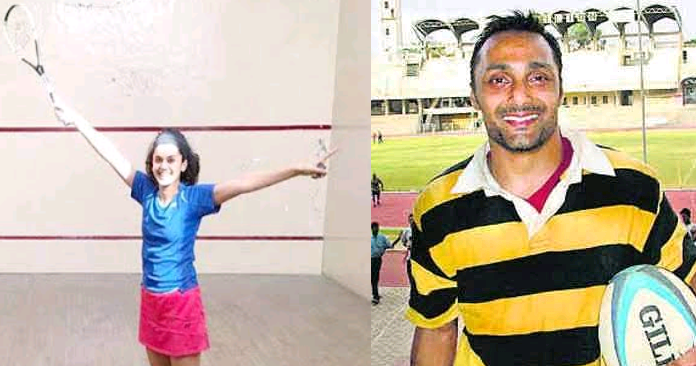 Bollywood plays a huge part to make the people active for various sports. There are many actors and actresses who love to play sports in their free time. Some of the actors have made a step ahead by owning a sports team to having a significant number of shares in the sports leagues.

Here we present you 10 Bollywood celebrities who are deeply
interested in sports and love to play by taking breaks from their hectic work
schedules. This list includes actors who have played such sports at bigger
levels instead of just local neighborhoods or for fun.

Taapsee Pannu is now a popular face of Bollywood, thanks to
her praiseworthy performances in various movies like Pink, Manmarziyaan, Badla,
and many more. She is very bold with her fitness routine and often shares the
fact that she loves playing squash and it helps her to be in shape.

To prove the point more clear, her co-star Saqib Saleem and
Varun Dhawan admitted that Taapsee had beaten them black and blue in the game
of squash as she is really good at it.

9. Saqib Saleem is all crazy about Cricket

Talking about Saqib Saleem, he is not good at Squash but he
loves to play cricket. In a recent interview, he mentioned the fact that Virat
Kohli and he played together. He has started his career in cricket before
modeling and acting. Now he is a part of Mumbai Heroes in the Celebrity Cricket
League.

Randeep Hooda is one of the finest actors of this
generation. He has a separate fan following but one thing that sets him apart
from the rest of the Bollywood is his love for Horses. You are certainly not
familiar with the fact that Randeep is a professional polo player and he has
taken his sports very seriously in the last couple of years.

7. Ranbir Kapoor is a Football aficionado

Ranbir Kapoor has been seen showing his football skills at
many functions and charity games events. In the Indian Super League, Ranbir is
the co-owner of the Mumbai City FC that represents Mumbai. Reports say Ranbir is
all set to feature in a friendly against AHFC that features Indian cricketers.

6. John Abraham is also famous for his Football devotion

John Abraham is a high-profile celebrity who is a known
football lover. He also featured in a movie based on Football players. John has
represented Indian A-division as a center-forward if you want to know the
truth.

He confessed that he developed this love for football in
early childhood by watching football matches with his father and later on he
was the caption of his school football team.

Rahul Bose is an actor famous for his versatility in movie
selection and the choices he made with the character roles. Little you know
that this versatile actor also has several achievements in the sport of Rugby.
Rahul has represented India at the highest level for more than 25 years in
Rugby.

4. Deepika Padukone used to play badminton before entering into Bollywood

Deepika is the daughter of India’s greatest badminton player
Prakash Padukone. She also, like her father, has excelled in the sport of
badminton.

3. Shah Rukh Khan has a soft corner in his heart for cricket and hockey

King Khan also loves to play cricket and hockey in his free
time. For instance, he got the role of Kabir Khan, an Indian women hockey coach
in Chak day India! And owns an IPL cricket team named Kolkata Knight Riders.

2. Aamir Khan has also get perfection in Tennis

Aamir Khan is called Mr. Perfectionist in Bollywood. When
all Bollywood actors and actresses showing their love for Football and Cricket.
Aamir loves Tennis because he had played Tennis in state-level matches and
entered into acting when he was one foot away to play nationally.

1. Akshay Kumar is the Khiladi of martial arts

You have seen Akshay Kumar performing stunts and it looks so
natural because he is a black belt holder in taekwondo and also skilled in the
ancient art of Muay Thai.