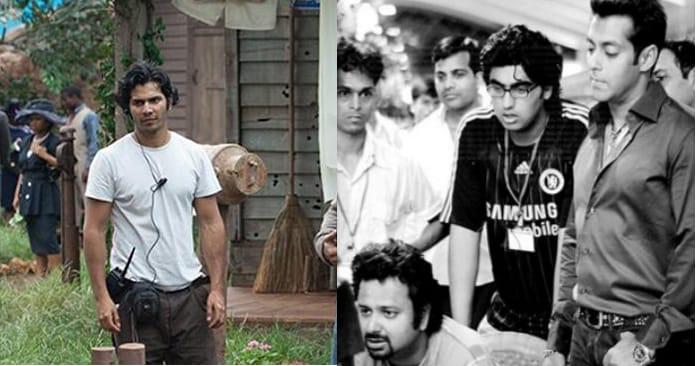 There’s a say that you must get the knowledge of your field before you entered into. It seems like the Bollywood industry is taking this very seriously and most of the Bollywood actors have worked for the film as behind the camera artist before making a debut in Bollywood films.

How important it is can be explained by the statement given by Alia Bhatt. She said that she had no clue how camera angles and movie setup works because she hadn’t seen any of this but Varun and Siddharth has a good idea because of their AD works.

Check out the list of these 10 Bollywood actors who had worked behind the camera before making Bollywood debut.

Vicky Kaushal was all set to get into a different life with his engineering. He also paid the visit to the IT Company before he started visiting the movie sets with his father Sham Kaushal.

Vicky Kaushal got his first role in the industry as an assistant director in Gangs of Wasseypur under the direction of Anurag Kashyap.

Sanjay Leela Bhansali advised her to lose weight and become an actress instead of working behind the camera.

Being the son of a director, it is expected from Varun to know the how-to answers of filmmaking as he wants to be in the industry.

Varun has also worked as assistant director for the Dharma Production in the movie ‘My Name Is Khan.’ Later on, Varun becomes the choice for Student of the Year directed by Karan Johar.

Siddharth Malhotra is graduated from Delhi University. He started his modeling career when he was just 18 years old. And before making his grand debut in ‘Student Of The Year’ along with Varun Dhavan and Alia Bhatt, he worked as assistant director for Karan Johar in the movie My Name Is Khan.

Varun and He are friends since their working days when they both used to be Assistance director.

Bhumi Pednekar used to be an assistant casting director for Yash Raj Films for almost 6 years. She got the role when she made a clip for the audition of the movie ‘Dum Laga Ke Haisha’ and her audition clip landed on the Aaditya Chopra’s desk.

She used to work with Shanoo Sharma and now she is one of the most talented Bollywood actresses of this generation.

Parineeti Chopra has excellent academic skills as she has a triple honors degree in business, economics, and finance. Pari used to work on the Yash Raj Films PR team.

She was advised by someone to give auditions for the movie. She did so and got 3 movies to deal with Yash Raj Films.

Vikrant Massey is quite a popular name in the industry this time because of his sensational performances in movies and web-series. Vikrant has featured in Mirzapur, Criminal Justice, and Made in Heaven.

Recently, he has done movie Chappak opposite Deepika Padukone. Little you know the fact that Vikrant is a trained ballet dancer and he worked as an assistant choreographer with Shiamak Davar for the show Dhoom Machao Dhoom before trying his luck in front of the camera.

Harshvardhan Kapoor is the son of actor Anil Kapoor. He recently featured in the Bollywood superhero movie.

After completing his method acting course from Lee Strasberg Theatre and Film Institute, Ranbir chose to work as an assistant director before making his Bollywood debut.

He worked as an assistant director in Sanjay Leela Bhansali’s movie Black, along with Sonam Kapoor. Before that, he also assisted his father Rishi Kapoor during the shoots of Aa Ab Laut Chalen back in 1999.

He worked as an assistant producer with his father in Wanted and No Entry.