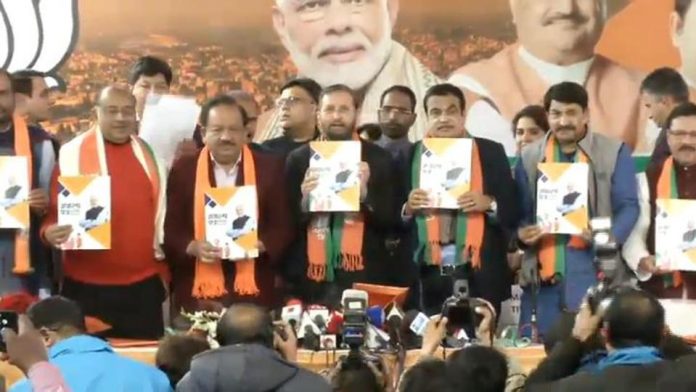 The BJP has released its election manifesto on Friday for the upcoming February 8 Delhi assembly elections. The manifesto which includes a host of promises for the residents of Delhi with the saffron party’s vision for the National Capital was unveiled by senior party leader Nitin Gadkari, Union minister Harsh Vardhan, Delhi BJP chief Manoj Tiwari, party’s Delhi election in-charge Prakash Javadekar, Rajya Sabha MP Vijay Goel and other leaders.

Delhi BJP chief Manoj Tiwari said that if BJP government is elected in the national capital, people in Delhi will get clean tap water and their dependency on water tankers will become zero. Also present at the event, Union Minister Nitin Gadkar, took a swipe at freebies given by AAP government saying, “Freebies will not help carve Delhi’s future, concrete steps were needed”.

The top focus of the ‘ Sankalp Patra’ is to reduce the air and water pollution in Delhi. The BJP, with its manifesto, has also made a range of promises to be fulfilled if it is elected to power in the state elections. Some of the salient points of the manifesto are:

Delhi is scheduled to go to polls on February 8, 2020. The results of the assembly elections will be declared three days later, on February 11, 2020.