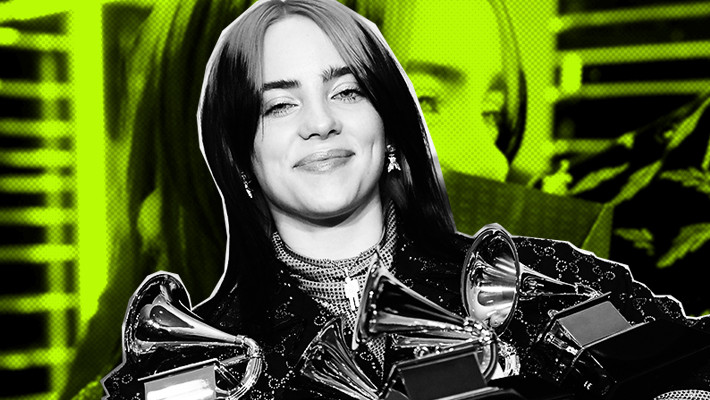 Last night, Billie Eilish made history: she became the youngest artist to win the Album Of The Year award at the Grammys. At 18, Eilish is younger than the former record holder, Taylor Swift, by two years, and it is certainly great to see a young woman being honored in this way. Taylor, who won at the age of 20, was notably absent from the ceremony last night, though she was reportedly scheduled to perform her feminist anthem, “The Man.” It’s unclear whether she pulled out because of the allegations that CEO Deborah Dugan made about unfair voting and a toxic culture at the organization, or another reason. Either way, even though it was a historic moment for Billie and a huge milestone for her career, she was shown on camera pleading to herself: “Please don’t be me.”

This isn’t just false humility or altruistic grandstanding on Eilish’s part, but shows her understanding of a system that has routinely shut out deserving artists for random favorites. Given her young age, and plenty of comments she’s made about following the music industry closely, Billie is sure to have seen Kendrick’s epic loss to Macklemore in 2014 (she would’ve been 13), and watched Beyonce lose in 2017 for Lemonade. Or, there was Beyonce’s other epic loss, to Beck in 2015. While the crux of these losses was based on the Academy’s refusal to honor monumental contributions from Black artists, that history, taken together with the accusations of favoritism made by Dugan, makes winning this many times an uncomfortable proposition.

In Billie’s case, the albums that towered above When We All Fall Asleep, Where Do We Go? were Ariana Grande’s Thank U, Next, which was a paradigm-shifting move for pop that rivaled her own ASMR-sing-rapping, and Lana Del Rey’s songwriting epic, Norman F*cking Rockwell. Both of these records were the culmination of five or six records from each artist, and it would’ve perhaps felt a bit more fair to see Ari or Lana have their decade of work in the industry honored. Don’t get me wrong, I think Billie’s album is great, but preemptively piling an artist’s initial work with awards doesn’t always work out well (See the Best New Artist curse for more). And while I think “Bad Guy” deserved all the recognition in the world, it’s hard to measure the entire album up against works like Rockwell, or even Lizzo’s breakout, Cuz I Love You.

Eilish and her brother Finneas also seem to be pretty aware of the privilege they have as children of parents who work in Hollywood, their father is actor Patrick O’Connell and mother is actress/screenwriter Maggie Baird. None of this is to take away from the great album the siblings created together, but it is important context for Billie’s own internal analysis of her wins and the framework of factors that inform them. As an extremely self-aware and intelligent kid raised in the age of wokeness and Twitter, it’s all but impossible she isn’t thinking about the difference between her own background and that of, say, Lizzo. At the same time, she’s made numerous comments in the lead up to the ceremony about wanting Ariana to win after all the trauma she went through with her ex-boyfriend Mac Miller’s death, the terrorist attack in Manchester, and flurry of her short engagement to Pete Davidson.

All this context and more surely goes into the reluctance that Billie felt to pick up not just Song Of The Year and Best New Artist — the award she said she was most hoping to win — but Album and Record Of The Year as well. Still, it’s an insult to the other artists and to the system (however flawed it may be) to not show a certain amount of gratitude, and the expectation for that kind of behavior is even stronger for a young woman. So Billie managed to strike a balance between surprise and hesitation and short, sweet gratitude: The pair’s final speech for Record Of The Year was just the phrase “thank you” in unison, before walking off the stage for the last time.

By choosing to turn Billie into the biggest winner of the night, the Academy could pat themselves on the back for making strides toward “change” by honoring a young woman, but, in reality, they continued to snub albums that were born out of trauma and heartbreak (Ariana), long years of going unacknowledged (Lana), or the kind of representation in pop and hip-hop that has been sorely lacking (Lizzo). As much as Billie is also a deserving recipient of the recognition she was given, in some ways, she’s the easy choice for maintaining the status quo while gesturing toward inclusivity. It will be fascinating and telling to watch what she does with her newfound status after this kind of recognition.