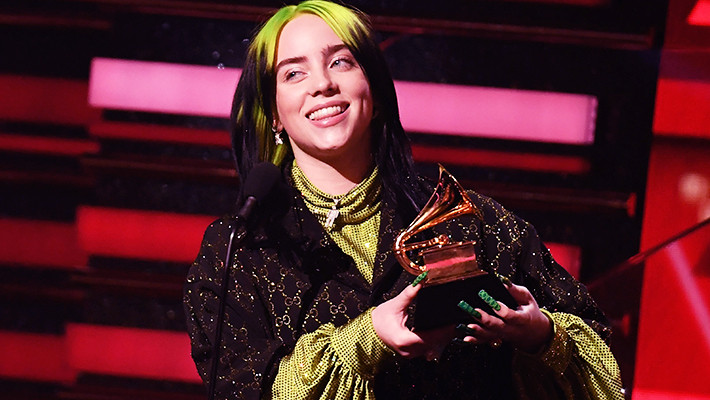 It’s safe to say that from the awards perspective, Billie Eilish and her brother Finneas dominated Sunday night’s Grammy Awards. Not only did the pair perform a stripped-down live take on “When The Party’s Over” — Billie demonstrated her lovely vocal tone and range at the mic as Finneas contributed understated piano — but each musician took home an armful of awards.

Eilish, in particular, is in rarefied air with her wins, because she took home the so-called Big Four awards: Best New Artist, as well as Song, Record, and Album Of The Year. Prior to last night’s wins, the only other artist to have achieved this clean-sweep honor is soft-rock titan Christopher Cross, who dominated the 1981 Grammys broadcast thanks to his 1980 hit “Sailing” and 1979 self-titled debut LP. That means Eilish is the youngest artist — and the only woman — to receive the Big Four. (It is worth noting, however, that Norah Jones also technically swept the Big Four at the 2003 ceremony thanks to the languid “Don’t Know Why” and her debut Come Away With Me — but because Jesse Harris has the sole songwriting credit on the tune, she herself didn’t take home the Song Of The Year trophy.)

To put into perspective just how rare it is for an artist even to be nominated in the Big Four categories, this has only happened 12 times total since the Best New Artist award joined the Grammy ranks in 1959. In fact, it’s largely a modern phenomenon: In addition to Cross, only three artists — country upstart Bobbie Gentry (1967), technicolor pop star Cyndi Lauper (1984), and folk-rocker Tracy Chapman (1988) — earned Big Four slots in the first 30 years it could’ve happened.

From the late 1960s and into the 1970s, this lack of Big Fourdom was largely due to the Grammys consistently prioritizing established acts over up-and-comers for the big awards. As an example: During that timeframe, Album Of The Year went to later-period LPs by Frank Sinatra, The Beatles, Glen Campbell, Fleetwood Mac, and Stevie Wonder. Even Carole King, who swept the Big Three at the 1972 ceremony for her solo breakthrough Tapestry, wasn’t up for Best New Artist, as she had recorded songs (and co-written dozens more indelible hits) in the 1960s.

During the ’80s, those who did get Big Four nods — but not a sweep — were at the mercy of the creatively fertile (and competitive) pop blockbuster era. Lauper lost out to hits from Tina Turner and Lionel Richie, while Chapman fell to George Michael’s Faith and Bobby McFerrin’s “Don’t Worry Be Happy.” In contrast, competition of another sort — of artists specializing in roughly the same genre or approach to music — sank musicians who received Big Four nods during the ’90s and into the early ’00s. In 1990, Mariah Carey’s sparkling ballad “Vision Of Love” lost to two dramatic tearjerkers (Bette Midler’s “From a Distance” and Phil Collins’ “Another Day In Paradise”); Paula Cole’s propulsive folk-pop hit “Where Have All The Cowboys Gone?” lost to Shawn Colvin’s own folk-pop hit “Sunny Came Home” and Bob Dylan’s Time Out Of Mind in 1997; and, in 2001, Indie.Arie was bested by Alicia Keys in three out of the four categories.

In the last 15 years, as the Grammys increasingly started focusing on newer mainstream acts, artists nominated for the Big Four came much closer to winning all the general categories. Two nabbed three out of four, and were prevented by a clean sweep only a due to an upset: In 2007, Amy Winehouse lost Album Of The Year to Herbie Hancock’s River: The Joni Letters while Sam Smith lost Album Of The Year to Beck’s Morning Phase in 2014. fun., meanwhile, won two of four in 2012 — but lost Record Of The Year to a one-hit wonder (Gotye’s “Somebody That I Used To Know”) and another upset (Mumford and Sons’ Babel took home Album Of The Year).

The lone exception to this contemporary Big Four momentum is Lizzo, who had the most Grammy nominations of any act in 2019 — eight, including Best New Artist, Album Of The Year (Cuz I Love You) and Song and Record, as a co-writer of “Truth Hurts” — but only won three awards due to Eilish’s victories. The only other Big Four-nominated artist to get shut out completely from a Big Four win is IndieArie. In fact, Lizzo and IndiaArie are the only two Big Four-nominated artists not to win Best New Artist.

It’s far too early to analyze what this awards sweep means long-term for Eilish’s career, especially since the only precedent is Cross and his complicated musical journey. Although “Sailing” remains an indelible part of pop culture — it was covered by *NSYNC and Barry Manilow and appeared in a 2017 Hyundai ad — Cross himself had only another No. 1 hit (1981’s “Arthur’s Theme (Best That You Can Do)”) and one more big album: 1983’s gold-selling Another Page, which spawned three U.S. top 40 hits, including the smooth, No. 9-reaching single “Think Of Laura.”

Both Eilish and Finneas were self-effacing and even a bit bashful about their wins last night, which bodes well for their longevity and success. After all, keeping in mind that a Grammy isn’t the end-all be-all measure of success — and that a music career is a marathon not a sprint — has served Cross particularly well.

“When you can’t sustain the kind of success I had, people are like, ‘Oh, well, it’s over for him,’” he told SongFacts in 2013. “And it’s funny, because I continue to do good work. But I’m not complaining. I had a great start to my career, and even today if you walk down the street and ask somebody who Christopher Cross is, most people will say, ‘He’s the “Sailing” guy.’ I’m a little bit luckier than a lot of people, so it’s great.”