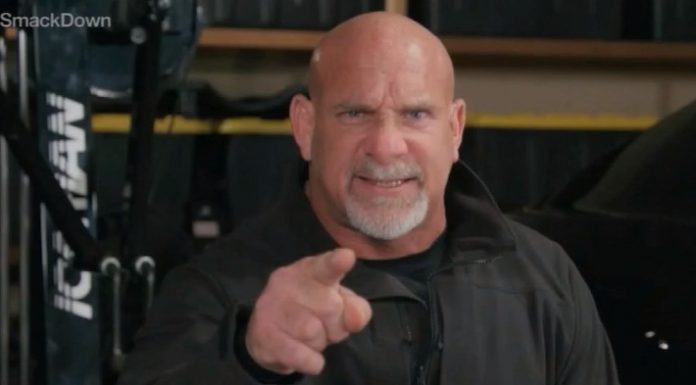 After indicating that another string of WWE matches for him was, “a very good possibility,”, Hall of Famer Bill Goldberg returned to WWE on Friday Night Smackdown to bring it via satellite and challenge The Fiend Bray Wyatt for a Universal Championship match at Super Showdown in Saudi Arabia on February 27. Goldberg said that his time as Universal Champion was, “all too short,” and that he never got a rematch.

The interview was quickly interrupted by “Firefly Funhouse news,” with Wyatt reporting on “William Goldberg’s” challenge, and how the word on the street is that The Fiend accepts. You can watch the segment below.

Goldberg once again shows up to get that Saudi bag, following the seven figures he got to wrestle The Undertaker in a match so bad he called it a “perfect storm of crappiness” and needed a SummerSlam rehabilitation appearance (and a blood sacrifice from steakhouse rival Dolph Ziggler) to make it right.

The Fiend’s most recent sojourn to Saudi Arabia was at October’s Crown Jewel, which saw him no-sell eight Curb Stomps and a superkick off a stage into an exploding production area to casually defend the Universal Championship against Seth Rollins. This one should be fun.