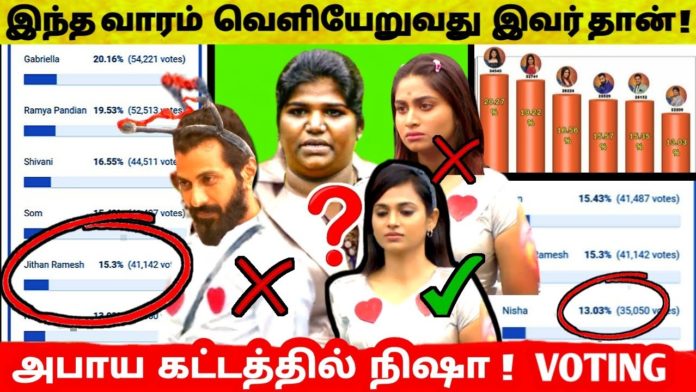 Bigg Boss Tamil season 4 is picking up from where it ended last week, Sanam Shetty one of the fan-favorite contestants is eliminated from BB house last week. This has shocked many fans. Six contestants have been nominated this week in Bigg Boss Tamil 4, including Ramya Pandian, Nisha Aranthangi, Shivani Narayanan, Som Shekar, Gabriella, and Jithan Ramesh.

Well, post her exit, the Monday nomination has surprised the mini-screen audiences, as most of the members of the ‘Anbu’ group have been nominated for the tenth-week elimination.

Anitha Sampath, who was chosen as the captain of the house, was excused from the process. Let us tell you that the contestants were directly nominated during the recent call center task based on their performance. On the other hand, a twist in the nomination was brought in the ranking task as the top 3 contestants – Aari Arjuna, Balaji Murugadoss, and Archana Chandhoke were given the immunity to save themselves by replacing their position with 3 saved contestants. Saved contenders, including Jithan Ramesh, Gabriella, and Som Shekar, were replaced by them.

• Install the Hotstar App (Available in Android and iOS).
• Create an account using email id, phone number, or social media account.
• Click ‘Bigg Boss Tamil 4’ in the search bar.
• Click on the Vote icon and cast your vote to save your favorite contestant.
• Users have 50 votes each day, which they can either use for a single contestant or can split among the other contestants on the list.
• It is also to be noted that the vote bank closes on Saturday at midnight.