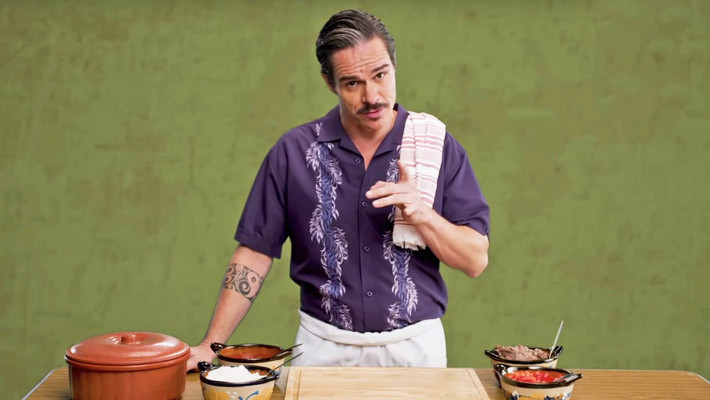 Better Call Saul‘s Lalo Salamanca once tortured a hotel proprietor for disrespecting the him and burned the proprietor to death and his hotel down. He kept the bell from that hotel as a souvenir, and gave it to his uncle, Hector Salamanca, who later used it trigger the explosives that killed Gus Fring.

Lalo Salamanca is a violent, sadistic man, but he’s also a very good cook. Recall that his introduction to the series came when he made a delicious meal for Nacho, although when Lalo talks about food, it always sounds vaguely threatening.

In the upcoming fifth season of Better Call Saul, Lalo is likely to put his charm and love for food to good use against Gus Fring, who Lalo believes is exploiting the ill health of Hector to his advantage. Lalo — who is also a cousin to the psychopath Tuco — has stepped in and taken over the cartel business in Hector’s absence, and his first order of business will be to track down the giant meth lab that Gus is building with the aid of Mike. It will almost certainly put Mike and Gus on a collision course with Lalo, and Nacho may end up becoming collateral damage.

Here he is showing us how to make the perfect taco, a taco so good that “you’ll drown your brother, just for a taste.” It’s the latest in a series of promos for the upcoming Better Call Saul season, offered as a reminder to viewers who may have forgotten what’s going on in the year and a half since the series last aired. The season will cover Jimmy’s transformation and the fall-out with Kim, while Lalo will be the main antagonist to Gus Fring and Mike Ehrmentraut.

Better Call Saul‘s second to last season premieres on February 23rd, as it works toward a series finale expected to be better than that of Breaking Bad.