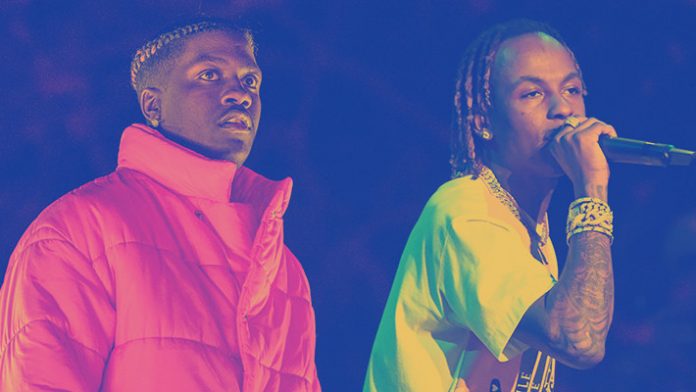 Hip-Hop is moving as fast as ever. Luckily, we’re doing the work to put the best music in one place for you. This week, there were new songs from Russ and Trippie Redd, Lil Pump, Chika, and Lil Tjay who paid homage to the late Pop Smoke. There were also videos from Lil Baby, Brockhampton, and wrestler (!!) Xavier Woods. Here’s the best of the rest:

Conway has been a busy man lately. We covered two of his freestyles in the last roundup. And he dropped two more freestyles at the end of last week. He showed off his versatility by rhyming over Young Thug’s triumphant “Hot” beat, then got introspective over a spooky Graymatter production on “Fredo Joint,” where he ponders, “I’m still learning how to cope with all the pain / how the f*ck I’m supposed to cope with all the fame?”

Baby Keem’s “Orange Soda” is one of the hottest songs of the moment. Rich The Kid is the latest artist to jump on the hypnotic track, dropping braggadocious bars and declaring himself “that underground n**** with the check.”

Lil Yachty has been open about Chief Keef as one of his musical inspirations. Little did he know that he’d have the chance to float over one of his beats like he did on “Get It Bussin” with Tadoe. The two artists take turns talking tough over Keef’s concoction of quaking 808s under a hellish synth.

Drakeo The Ruler’s team has been doing a good job of keeping his name alive while he’s incarcerated and fighting a controversial conspiracy case. But it’s more a credit to the LA rapper’s prolific output. On his latest release, a “Pippi Longstocking” remix, he and a slew of LA rhymers trade bars over a mysterious Duse Beats slapper.

Blocboy JB has been flippin’ all week. Besides his unfortunate blooper that was shared on social, you can enjoy “Big Mac,” a characteristically short ode to his street supremacy where he lets us know, “n****s” stand for me like I was the pledge.”

New York rap legend Juelz Santana is currently in a New Jersey prison on a gun charge, but his team decided to drop off “23 & 1,” a song he recorded before he went in. He rhymes about the encouragement he received from his 14-year-old son when telling him about his upcoming bid, talking to the currently free Meek Mill (while the Philly rhymer was incarcerated), and affirms his innocence by saying, “if it was my gun it would’ve bigger.” Hopefully, the title doesn’t reflect that he’s actually incarcerated for 23 hours a day.

On “Grew Up,” CJ Fly shows off his slick lyricism on a Statik Selektah track from his upcoming RUDEBWOY album.

Bronx rapper Kemba dropped a stirring, assonant verse on “School Shooter,” a track from the late XXXTentacion’s Bad Vibes Forever album. Kemba also appeared on the BFV track “Daemons,” but was clearly impressed with another song from the posthumous album.

YBN Almighty Jay is known for touting a bulletproof persona over turnup vibes, but he got vulnerable on “Scarred,” where he explores a fractured relationship by bemoaning “I loved you too hard” and “I let down my guard.”

On “Bootleggers,” Chattanooga, Tennessee’s YGTUT laments that “I swear the game ain’t been the same since Pimp C went home” and lets us know “you need the real, not the bootleggers” over a wondrous, trap-driven instrumental.

It’s an all-Toronto thing on “Smoke,” a collaboration where Haviah Mighty double-time rhymes that “they don’t got the armor” over a cavernous instrumental. The Jon Riera-directed video fits the moody vibe of the Combo Bravo production from Haviah’s 13th Floor project.