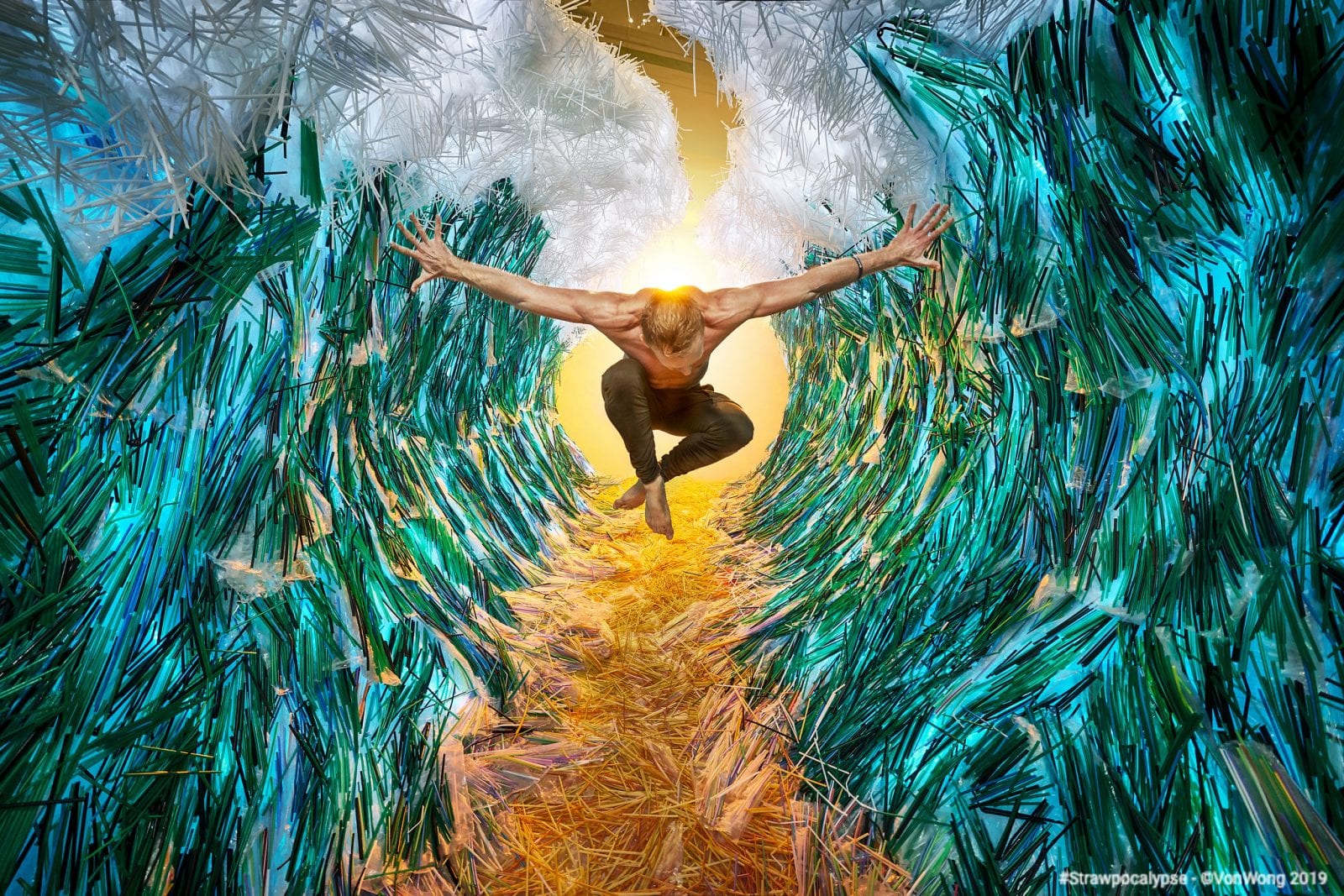 Artist and visual engineer, Ben Von Wong is known throughout the world for his show-stopping pieces that focus on making a positive impact.

About four years ago, Ben Von Wong decided to make a change. Already a successful artist known for his hyper-realistic style and conceptual photography, Wong decided to focus his skills on making an environmental impact. Combining reality and fantasy, Wong’s projects showcase recyclable materials and have a strong message for those that come to see them.

Speaking of his last big project, known as ‘The Parting of the Plastic Sea’ Ben Von Wong stated, “This was the first time that many of the people coming through saw how tiny little actions can really add up to have a big impact.”

Troubling recent statistics state that there could be more waste than fish in the world’s oceans by 2050, which is just thirty years away. So in 2018, when Starbucks announced its plastic straw ban, Von Wong and his team decided to showcase exactly why the coffee giant did what they did. Creating a play on the biblical story of Moses parting the sea, Von Wong tried to envision what it would look like should the sea really part this day and age.

“I guess the idea was that if the parting of the plastic sea were to happen in 2050… The sea would peel back and reveal a ton of trash, an entire ocean made from plastic and using straws… was the perfect catalyst for it since it was a very popular conversation topic. The product was sponsored by Starbucks and done in collaboration with zero-waste Saigon, who helped me collect over 160,000 plastic straws over the course of six months, with volunteers, all over the country,” Von Wong told GritDaily.

Using green and blue straws to create and ocean-like base and employing clear and lighter colored plastics on top, the way Von Wong arranges these recyclable materials is similar to the waves an artist’s brush makes – not an easy feat.

“They’re used for just minutes but take centuries to disappear. Hundreds of millions of straws are used every single day around the world. We wanted to intercept just a fraction of them to show how these tiny little things add up into a very big problem,” said Wong about the inspiration for the project.

In collaboration with Zero Waste Saigon and Starbucks Vietnam, Wong and his team collected 168,000 straws off the streets to use in this installation. This piece was shown at the Estella Place mall in District 2 of Ho Chi Minh City, Vietnam for two months, where it won a place in the Guinness World Record book for the largest straw sculpture in the world. The sculpture itself measured to be 3.3 m (10 ft 9 in) tall, 8 m (36 ft 2 in) long and 4.5 m (14 ft 9 in) wide.

With the success and conversation around “The Parting of the Plastic Sea,” as a jumping-off point, Ben Von Wong teamed up with Social impact strategist Laura Francois and created “#Plastikophobia” in March of 2019 – an ethereal sea cave made of 18,000 plastic cups.

It took Von Wong and his team just two days to collect that amount of cups from the “hawker” centers around Singapore.

Another honest look at the way humans interact with the environment, “#Plastikophobia” seeks to make individuals think a little harder about their impact.

In 2018, Wong teamed up with Dell’s e-waste program to collect 4,100 pounds of electronic waste for an incredible art project:

His photography, namely “Oxygen Refugees” is a feature on the UN’s website.

For more on the #Plastikophobia project, check here. For the rest of Ben Von Wong’s work, check out his website. For a refreshing way to look at art, advocacy, and environmentalism, don’t forget to follow Von Wong on Instagram.