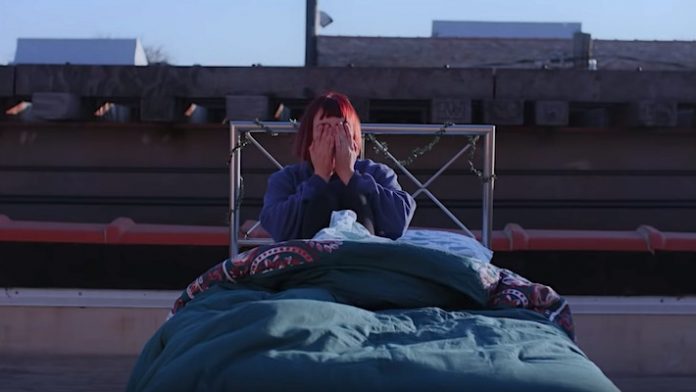 Chicago indie-rockers Beach Bunny are heading to Coachella in April after making waves in their hometown music scene and selling out a North American tour. The band put forth a group of singles in 2019, but “Promises” marks the last track released before their debut album, Honeymoon.

Directed by Everybody’s Baby, the “Promises” video is a visualization of Beach Bunny vocalist Lili Trifilio’s attempt to get out of her head. Trifilio continues to awaken with her bed placed in different locations around the city. At one point, the singer realizes that she’s in the middle of a party but no one can see her, a metaphor for the feeling when daydreaming thoughts consume waking life.

In the song itself, Trifilio copes with the lingering pain and heartbreak of a previous relationship. “Promises and problems were all left unsaid / Buried away at the back of my bed / Close my eyes but every time I try to rest / It’s hard to think clearly, you live inside my head,” Trilifio sings.

Ahead of the “Promises” video, Beach Bunny spoke with Uproxx about their musical aspirations. “I hope that Beach Bunny has a lasting impact in the way that it helps people get through hard times in life by relating to the lyrics and content I write about,” Trifilio said.

“Promises” follows the 2019-released singles “Prom Queen,” “Dream Boy,” “Miss California,” and “Cloud 9.” After the release of Honeymoon, Beach Bunny will embark on a slew of tour stops in the UK and Europe.

Watch the “Promises” video above.