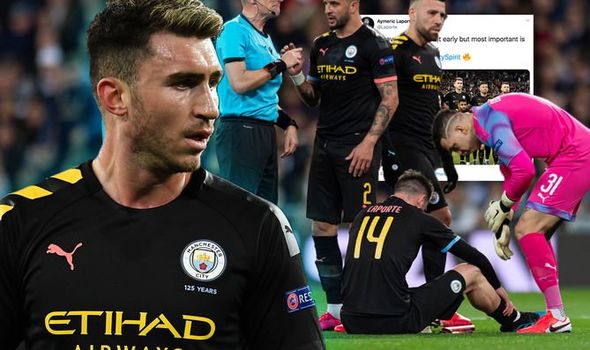 Manchester City hero Aymeric Laporte has admitted that he was sad to leave the match during the club’s Champions League tie against Real Madrid. Pep Guardiola’s side produced a sensational comeback at the Santiago Bernabeu to win 2-1, giving them a healthy advantage ahead of the return fixture.

Laporte’s frustrating season appears to have taken another turn, after he limped off the pitch on Wednesday night.

He was being treated on the field for a solid five minutes, before he was eventually replaced by Fernandinho in the 33rd minute.

After missing five months earlier this season through injury, the Frenchman was visibly disappointed while he made he way to the tunnel.

The centre-back has now admitted that he’s really sad to have another injury problem.

But, it was more crucial that the club win the match against Real Madrid, he claimed.

Laporte wrote on Twitter: “Sad to leave the team a bit early.

“But most important is the result tonight!!

“Proud of the boys #CitySpirit.”

It’s still not clear how serious Laporte’s injury is, but on first glance, it’s likely to be a lengthy lay-off.

Guardiola claimed that it was always going to be difficult for the defender to return after missing most of the season.

But, he was simply too important to the team to leave out for, arguably, City’s most important game of the season, so far.

The Citizens will now be forced to rely on Fernandinho, Nicolas Otamendi, John Stones and Eric Garcia for the rest of the campaign. 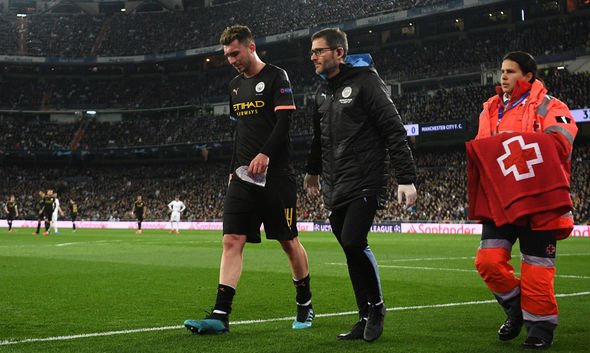 “He’s had four or five months [out], and it’s a problem when you come back.

“He came back in this demanding game, it’s a pity. We dreamed to be with him until the end.

“Unfortunately, we’ve suffered a lot in this department.

“But, with John [Stones], with Nico [Otamendi] and Dinho [Fernandinho] we’ll go through.”

Los Blancos took the lead after half-time, after a series of defensive mistakes, involving Otamendi, Rodri and Kyle Walker.

But, the goal was largely against the run of play, and Real Madrid’s goal appeared to kickstart City’s attacking prowess.

Gabriel Jesus scored the equaliser midway through the half, before Raheem Sterling was awarded a penalty in the final 10 minutes.

Kevin De Bruyne buried the spot-kick, giving City a huge chance of qualifying for the quarter-finals.