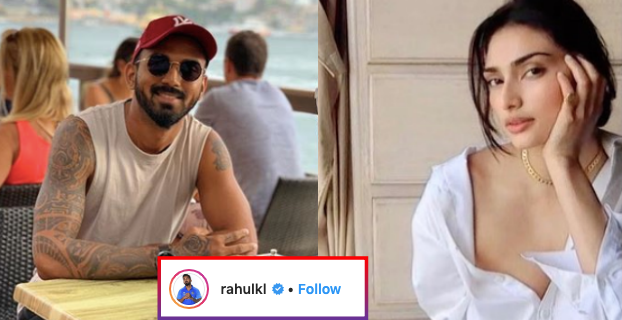 The 27 YO Athiya Shetty is the daughter of actor Sunil Shetty . She debuted with the film ‘Hero’ and after that , she was seen in movie ‘mubarakan’. Her links up with the cricketer KL Rahul are always in the air but both of them deny for any sort of relationship.

Recently, Athiya took to her Instagram handle and posted some pictures of which, first picture is of a bralette with tracks, the next three pictures are sensuous snaps of her ,wearing a white over sized shirt. She looks sizzling in the pictures with minimal make-up and her hair tied loosely. Sharing the pictures, she captioned them, “party of two!  ft with @sashajairam.” .

After she posted the pictures , she got many compliments , out of which one is KL Rahul. He wrote, “Nice shirt” with a ‘shush’ emoji. Now, his fans are predicting , if the shirt belongs to him? . One of the comment read, “bhai aapki shirt he…”, another reply read, “And I know it’s yours Rahul.”

Take a look at some of the reactions below:

It’s been an year now , when the special bond between Rahul and Athiya surfaced on the Internet after the cricketer shared an adorable wish for her on her birthday.