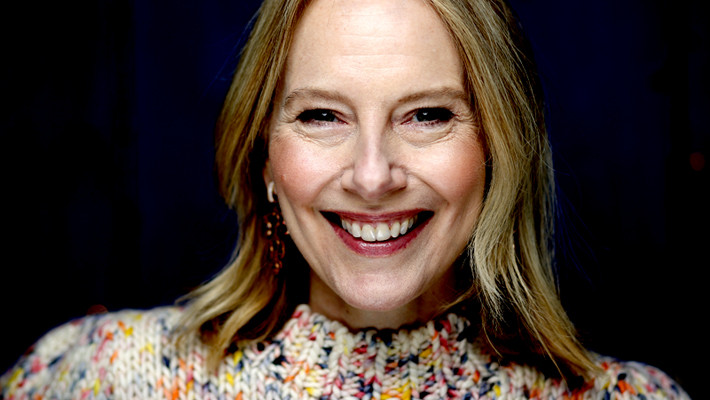 I sent an email to a publicist there would be “no antics” this time around while interviewing Amy Ryan. She and I have had many laughs over the last ten years, starting as far back as Tom McCarthy’s Win Win. But this year at Sundance, Amy Ryan stars in two films with very serious, heartbreaking stories based on true life events.

In Liz Garbus’ Lost Girls (based on Robert Kolker’s book), Ryan plays Mari Gilbert, a mother who is trying to find her missing daughter, which uncovers a series of bodies from missing women who had allegedly been working as prostitutes. To this day, the serial killer hasn’t been found (there is literally a serial killer on Long Island and it gets very little attention because the victims are women of lower means) and the local police, as the film shows, have been, to be kind, inept. It’s a heartbreaking story that, hopefully, will shed light on the fact there’s a serial killer still on the loose and few people seem to care.

Her other film is Worth. Ryan plays Camille Biros who, along with Michael Keaton’s Kenneth Feinberg, are tasked by the United States government to come up with a value for every single victim from the attacks of September 11, 2001 so that the families are provided for. Yes, it was also an attempt to come up with a fair number in an effort to stop endless lawsuits, but the people behind the scenes were caught in the middle between grieving victims and a government that wanted these claims settled. It’s two very strong performances for Amy Ryan here at Sundance.

When Ryan entered the condo we were meeting at, she gave me a look and said, “Oh no.” Before she could even say something along the lines of, “We can’t goof around this time,” I swore to her, yes, there would be no antics. (But she also promised next time we would double the antics.)

I told Netflix to tell your publicist “no antics.”

I realize the subject matter of the two movies you are in, and I swear I told Netflix I’m not here for goofs.

[Turns to her publicist?] Do you know about our goofs? [He nods yes.] Every time!

I’m so happy Lost Girls was made because I live in New York and it’s crazy because there is literally a serial killer in Long Island who hasn’t been caught and no one seems to care.

Do you remember when this story happened in the news?

I do, too. Then it went away. What we’ve taken and what Liz [Garbus] has done beautifully in the film, it’s the story of Mari Gilbert as she is searching for her daughter and is met with a ton of resistance with the Suffolk County police department And that just drives her forward. She is kind of a dog with a bone. She doesn’t take no for an answer.

Did you go down any rabbit holes with this? Theories about the killer?

Yeah. I did quick internet searches. First of all, in our version, there was the post-scrawl that mentioned that Mari is no longer living.

Right, which just doesn’t seem fair. After all this…

The tragedy continues for this poor family. Then when I met Liz to talk about the script she kept saying, “Well, she would say this and she would say that.” I was like, “I’m sorry, I’m not following who you’re talking about.” She said, “Well, Mari.”

Oh, Liz had met Mari before she died?

I was like, “What? You knew her?” And she said, “Yes. She was involved in early days of the script development.” It’s very chilling. But in terms of research and rabbit hole, most of that was on set. Liz was so ensconced in this project for years. Even as late as when Netflix released the trailer, coincidentally, on the same day, the Suffolk County police department releases that they found new evidence.

I saw that. It was a belt with initials, right?

Yeah. I texted Liz and I was like, “Wow, new evidence?” She’s like, no, apparently that’s old evidence.

The movie makes it clear the police investigation is a clown car operation.

Yes. This dismissal of women. The dismissal of women in a lower economic class — that if they were a sex worker they must have had problems at home, they don’t want to be found. This is the narrative that they’re thinking. They’re not treated as humans, as sisters, mothers, daughters, wives. They’re called prostitutes and hookers. Even just the dismissive attitude of because they’re poor, who cares? Who cares about the poor, really? It’s infuriating. But my biggest hope is that this film is such a hit that the audience gets more and more interested in the story, past sitting in the movie theater. And they start creating some buzz and, who knows, maybe some justice finally comes to this family. All the families.

This area where the bodies were found, Oak Beach, is really weird. I went to high school in Kansas City and there was this place called Dog Patch that was an unincorporated part of Kansas City that didn’t seem to have laws and, if you didn’t live there, they didn’t want you in there. This seems similar, only with beach houses.

My mother was visiting me at the time and I was offered this job and I started telling her about it and I said, “Oh, it’s out in an area near Fire Island, Jones Beach, Oak Beach.” She goes, “Oh, yeah. When I started dating your father, we went out there a couple of times because your grandfather had a house there.”

I was like, “What?” But it was like a quick summer rental. My father and grandfather have obviously passed away, but I was like, “What? How did they end up there?” Because they didn’t have means that they could suddenly rent a summer house. She doesn’t remember because she was just newly dating my dad at the time. But it gave me chills.

What seems to make this even more complicated is they go out there searching for the victims of this killer, but apparently it’s just a place where people put bodies because they can just easily disappear in these marshes. It’s crazy this exists. It’s insane.

Yeah, it is. We didn’t film there, the community didn’t want to have any part.

Oh, they didn’t like it? That’s surprising. That was sarcasm, by the way.

They didn’t like it. They actually chased our location scout out — chased them out of the property. We filmed on a little beach out on Long Island called Kenny’s Beach — they welcomed us. Which is nice and it was the perfect.

Most people do like it when a movie films near them.

Whatever shame or frustration or denial that they’re in, that they don’t want to help this case, that they just think it’s going to bring more trouble to their “paradise.” But there are so many questions about it still, 10 years later, and even with a court order to the Suffolk County police department to release the 21-minute 9-1-1 phone call, and they still refuse to do it. I don’t know why. It just seems very odd. That makes me think you’re hiding something.

There are theories that it’s more than one person.

The movie seems to think this Dr. Hackett fellow is involved, but the more you read about him, he sounds half-involved, half-crackpot.

The questions that the film puts out… leaning towards Dr. Hackett seems the most logical to me. Certainly one of maybe a few. Yeah. If nothing else, he seems to know what’s going on.

Yeah, he definitely knows something.

How is he just still out there not having to talk?

Innocent until proven guilty, that’s the beauty of our justice system. But yeah, it’s chilling.

And now there’s a movie about him.

Yeah, his friends will say, “I saw your movie on Netflix.”

When I went down the rabbit hole, someone mentioned maybe he’d be caught like how the BTK Killer was caught…

He was in Wichita. He went dormant, then in the mid-2000s started sending letters to the police again. He then asked the police if he could be traced if he started using computer discs instead of paper. The police responded in the local paper, “Nope. Totally safe. No way to trace that.” Then he sends a disc and, of course, his name is all over that thing.

He wanted to be caught. Maybe the whole DNA world now, like with what happened with the Golden State Killer. Liz is making a documentary on Michelle McNamara’s book.

You also star in Worth, which I also saw here. You did a great rendition of Michael Keaton on stage before the premiere.

Why did he send that to you instead of Sarah? Why were you the designated message passer alonger?

Were each other’s ray of faith.

In my mind, he can do no wrong.

I know he took some time away, but when he came back it’s just like, oh man, life is better now with him around.

He’s extraordinary. He’s the greatest person to hang out with all day on a long set and just the most extraordinary actor. I’d do anything with Michael.

But, again, that’s why I promised no antics because it’s a true story about 9-11 victims. I did tear up during that movie.

Yeah, I did too. It’s a hard one. What I love about that film, what I love about Ken Feinberg and Camille Biros are they are two people who went to work so soon after. Obviously financial compensation is not going soothe people’s grief of bringing their loved ones back, but it pays a bill, it pays a mortgage. It takes some stress out of their lives so they can mourn in their own way. But it’s just this niche part of that time that many of us, I think, don’t know about. I find the film compelling and heartbreaking at the same time.

People are going to read this and go, “I came here for the antics,” and there are no antics this time.

Well, just think, it’s going to build up. It’s going to flow next time. They kept us down.

That’s right. Oh my God, I wish you the best.

You, too. Oh my gosh, always the best talking to you.

Give me a hug.