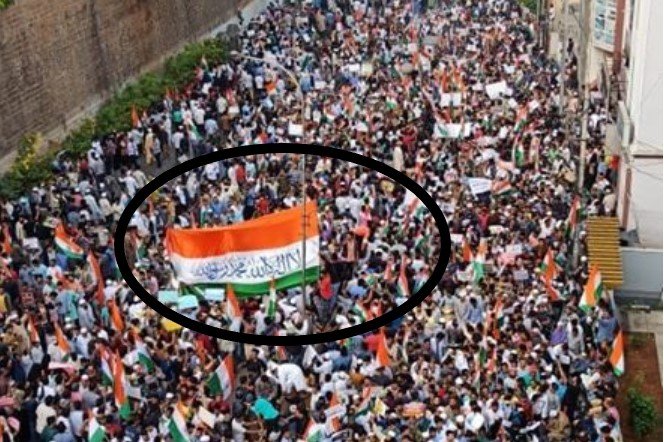 A picture from an anti-CAA protest in Hyderabad has gone viral on social media, which shows leftist and Islamic mob carrying Indian National flags in which the revered Ashok Chakra has been replaced with the Islamic Shahada ‘La Ilaha Illallah’ meaning “there is no other God but Allah”.

A Facebook user Rajat Ranjan shared a photo of a crowd moving on the road on January 30, 2020. Sharing this picture Ranjan claimed that during the demonstration in Hyderabad against the newly introduced Citizenship Law, the Indian flag had been distorted and the Ashok Chakra on the flag was replaced by the Islamic Shahada.

This claim appeared to be true and was indeed from Hyderabad in Telangana. In an anti-CAA-NRC march, protesters assembled in large numbers near Hyderabad’s Lower Tank Bund area to protest against the CAA and NRC and the tricolour they carried indeed had the Ashok Chakra replaced with the Islamic Shahada.

This picture was apparently taken by photojournalist Vinay Madapu. Being the first to share the picture on January 4th, media outlet The New Indian Express had credited Vinay Madapu for clicking the picture.

The picture was then shared widely on various social media platforms. Scientist and columnist, Dr Anand Ranganathan also shared TNIE’s tweet from his verified Twitter handle writing: “From the anti-CAA march in Hyderabad today, what appears to be the Islamic Shahada [“There is no god but the Allah”] printed on the Indian tricolour in place of the Ashoka Chakra”.

From the anti-CAA march in Hyderabad today, what appears to be the Islamic Shahada [“There is no god but the Allah”] printed on the Indian tricolour in place of the Ashoka Chakra. https://t.co/bWm1JsYR5s pic.twitter.com/VYegv81IK5

It is pertinent to note here that the anti-CAA protest which has been raging on for weeks, all across the country, has exposed itself to be deeply Islamic and anti-India and anti-Hindu in nature with posters like F*ck Hindutva that distorted the Om symbol to several slogans like ‘Pakistan Zindabad’ and ‘Jinnah wali Azaadi’, that exposed the Islamist mobs’ deep-seated hatred for Hindus.