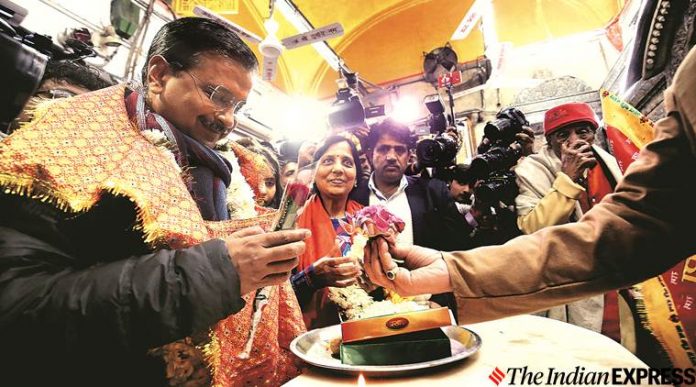 The Delhi Assembly Election results are trickling in and by the looks of it, it appears that Arvind Kejriwal is all set to retain his position as the Chief Minister of the national capital. While it is only natural that the secular camp is in a celebratory mood and the BJP will have to engage in significant introspection, there are certain truths about the whole affair that the secular camp will have to make peace with.

While it is only to be expected that the secular camp will trot around and call the results the rejection of BJP’s ‘divisive politics’, they would be coming to an extremely wrong conclusion. First and foremost, it is unlikely that the Delhi electorate rejected the BJP for fulfilling the promises it made in its manifesto for the Lok Sabha elections. Secondly, ‘Modi for PM, Kejriwal for CM’ was a popular theme among a significant section of the electorate. And thirdly, the Delhi results are a further indication of the fact that the electorate votes differently in national and assembly elections.

Most importantly, however, the campaigns by the two main parties in the elections, the BJP and the Aam Aadmi Party, only served as a resounding victory for Hindutva. The campaigns served as a further indication of the fact that the Overton Window of the country has shifted firmly on the side of Hindutva. It is a conclusion that can be drawn safely from the conduct of the incumbent Delhi Chief Minister Arvind Kejriwal himself.

Ahead of the elections, Arvind Kejriwal went out of its way to establish his Hindu credentials. He could be seen chanting the Hanuman Chalisa on national television and telling everyone about his devotion towards RamBhakt Hanuman. It is a distant cry from the days when parties would run helter-skelter to establish their secular credo. At the same time, the AAP supremo made sure to stay clear from the Shaheen Bagh protests himself. Although Manish Sisodia himself did say that the party was with the anti-CAA protesters and Sanjay Singh’s links with the PFI emerged, Kejriwal made sure that the Delhiites saw him chanting the Hanuman Chalisa instead of hobnobbing with the Radical Muslims of Shaheen Bagh.

It is a far cry from 2016 when Rahul Gandhi himself rushed to JNU to lend his support to the now infamous ‘Tukde Tukde Gang’ of the University. It is for a reason that it is said, “Fools rush in where angels fear to tread.” Now, Arvind Kejriwal is certainly no angel but he is smart enough to recognize the sentiments of the electorate who he represents. One thing is clear, the politicians are now no longer trying to earn brownie points from the leftwing echo chambers but from the Hindu masses and that can only be a good thing.

In the past, when political parties feared to lose the support of the minority community, they are now scared of a backlash from Hindus. Kejriwal may not mean it but there’s a line that he recognizes he cannot cross. And with the passage of more and more time, the lines will be drawn in the sand quite clearly.

The AAP, by the end of its election campaign, was begging the Shaheen Bagh protesters to end their protests as it was benefitting the BJP. Sanjay Singh could be found in press conferences telling the anti-CAA protesters through the media that they should introspect upon their own protests and whether they were inadvertently helping the BJP electorally through their protests. Before long, the AAP was blaming the BJP for the Shaheen Bagh protests and blaming them for the inconvenience caused to the Delhi electorate.

From the perspective of the BJP as well, it ran the most unapologetic and overtly Hindutvavadi campaign in a generation perhaps. One of the videos that it released for the polls, which caused a significant amount of angst among the secular camp, was Hindutva in a distilled capsule. Through its campaign for the Delhi elections, the BJP was able to raise issues and make significant arguments and further narratives in the domain of Hindutva that will certainly have a significant impact on the results of the Bengal elections in 2021 and the Uttar Pradesh elections a year after. That is, going forward, it can build upon the framework it has laid down in this election.

Furthermore, the results of the Delhi elections will have no impact on the direction the country is headed in. The campaigning and everything that has transpired in Delhi in the past few months has only further cemented the dominance of Hindutva discourse in the country. Hindutva has become so dominant that even the organizers of a Queer Pride Parade in Mumbai was forced to disassociate themselves from the slogans that were chanted in favour of Sharjeel Imam, the Shaheen Bagh mastermind. It’s the first time that something like this has happened. The results of the Delhi elections will not impact any of this at all.

Also, it is unlikely that the NDA government in the center will abandon its national agenda merely because of a defeat in a Union Territory with seven Lok Sabha seats. Thus, in terms of national policy, Hindutva will march on full steam ahead. Thus, the secular camp would like to believe that the Delhi results are a light at the end of a tunnel but it is more of a wish rather than objective reality.