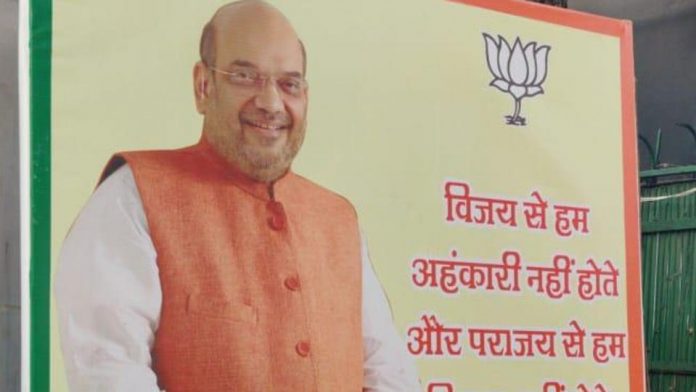 After the earlier trends on Tuesday indicated a clean sweep in Delhi Election by Aam Aadmi Party, the BJP put up a poster outside Delhi’s BJP office with an undefined message outside the Delhi BJP office. Written in Hindi, the poster carried a message saying, “Victory doesn’t make us egoistic, and defeat doesn’t disappoint us”. As reported by Hindustan Times the text was posted along with the picture of union Home Minister Amit Shah.

The senior ministers and the heavyweights of BJP left no stone unturned to influence the voters mainly hailing from the middle class who are affected by roadblocks due to Mass protests in Shaheen Bagh.

The Aam Aadmi Party noted a massive win in 2015 Delhi Assembly Elections grabbing 67 seats out of 70 seats of the Delhi Assembly while BJP got 3 seats.

The polling for the Delhi Assembly Election 2020 was held on 8 February in all the 70 Delhi assemblies. The Aam Aadmi Party contested 70 seats while BJP on 67 leaving 2 seats for its ally Janata Dal-United and 1 for Lok Janshakti Party.