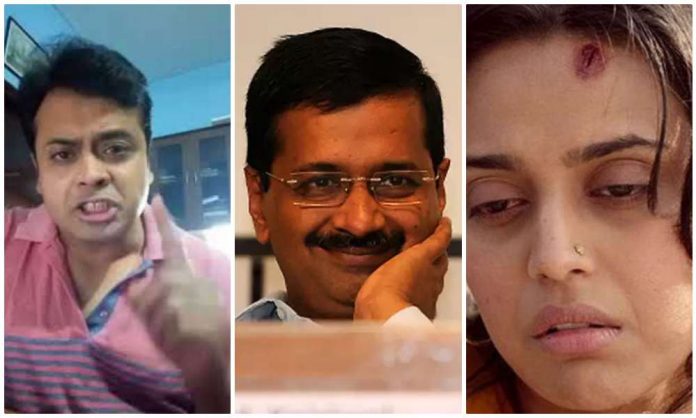 Delhi Chief Minister Arvind Kejriwal last night ‘unfollowed’ his support and fan base on Twitter after they criticised him over the current law and order situation in Delhi following the riots in national capital. In middle of the riots which broke out in Delhi last afternoon which has till now claimed lives of three people including a police officer, Radio Mirchi RJ Sayema, who has been quite a vocal Aam Aadmi Party supporter and has gone as far as soft-promoting AAP on her radio show, questioned Arvind Kejriwal’s ‘silence’ during the violence.

And even this doesn’t solicit a reaction from the popularly elected @ArvindKejriwal
Cool. https://t.co/02jjaTmRko

Sayema sarcastically put across her anger that the reports of communal tension in Chand Bagh did not solicit a reaction from popularly elected Kejriwal. Soon after her tweet, Kejriwal tweeted to urge the LG and Home Ministry to restore law and order in the national capital. Only then did Sayema was relieved.

Except, the sarcasm didn’t go down quite well with Kejriwal who eventually unfollowed her on Twitter.

Along with her, Kejriwal also unfollowed other anti-Modi ‘journalists’ like Abhisar Sharma who urged Kejriwal to ‘speak out’ and end his opportunistic politics.

Speak out @ArvindKejriwal . How long will you play politics and not be heard on an issue where your citizens of Delhi are targeted. Its your ‘state’. Speak up. Enough of opportunistic politics. https://t.co/wKrvVtCvMU

Abusive troll Swati Chaturvedi also tweeted similar appeal but Kejriwal didn’t unfollow her because he never followed her in the first place.

Speak out @ArvindKejriwal you are the CM of Delhi. This is not being clever it is cowardice. Support the people suffering

Also unfollowed by Kejriwal last night was junior Bollywood entertainer Swara Bhaskar. All she had done was tweeted and instructed Aam Aadmi Party leaders to do more than ‘tweet’.

This didn’t go down quite well with Kejriwal who promptly did more than tweeting and simply unfollowed her.

Amusingly, Kejriwal also unfollowed former AAP members like Krishan Pratap Singh and Arvind Jha for generally being critical of AAP in recent times. This is not the first time Kejriwal has cut off those who are critical of AAP. Earlier he had kicked out AAP founding member Kumar Vishwas, Yogendra Yadav and Prashant Bhushan amongst many others.

On the day of US President Donald Trump’s visit to India, the national capital has witnessed unprecedented violence. A Delhi police constable has lost his life in the riots that have ensued in the national capital in wake of the protests against the Citizenship Amendment Act. Another DCP has been injured during clashes between two groups in Delhi’s Gokulpuri.