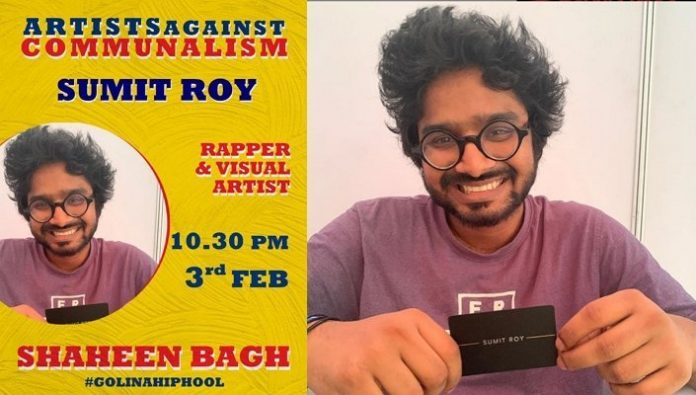 As the ongoing sit-in protest against the Citizenship Amendment Act at Shaheen Bagh in Delhi nears completion of two months, the organisers of the protest have made arrangements of entertainment for the protesters. Actor and ‘Social media influencer’ Kusha Kapila had addressed the gathering at Shaheen Bagh yesterday in what is a new addition to the protests where celebrities are invited to address and perform. A few days ago, the protest organisers had issued an appeal to artists and influencers to come and address the crowd, and accordingly, several artists have responded positively. The artists are performing at the event under the banner Artists Against Communalism.

Today the ‘official’ Twitter handle of the Shaheen Bagh protests announced that four artists will be attending the event this evening. They are, musician Ankur Tewari, Rapper and visual artist Sumit Roy, and musicians Yasif and Ghazali.

This need not be said that the artists that have offered to perform at the anti-CAA protests belong to left-liberal camp, who have peddled the lies that is being spread against the CAA over the last couple of months. One notable name among them is Sumit Roy, who had resorted to fearmongering against the CAA by claiming that due the amendment, Muslims will be forced to show documents to prove their citizenship of India, which is a complete lie as CAA does not even apply for Indian citizens.

Last month, Far-Left propaganda website, The Quint, has published a sob-story video of an alleged Muslim cab driver, who was seen breaking down due to fears of CAA and NRC. In the video, the driver was heard saying, “my heart starts pounding on just thinking about NRC. I don’t have land, neither do I have documents for land. What will I tell them to prove that I am an Indian.”

This story was immediately questioned by social media users who asked how someone without any document can become a taxi driver, that too in a city like Mumbai. After filmmaker Vivek Agnihotri had revealed that the alleged driver was actually a junior artist in Bollywood, The Quint had deleted the report. In the note informing about the deletion, the website had said that they had deleted it as the man seen in the video was facing severe trolling on social media, a strange claim that a man without any document in his name is active on social media.

Most importantly, the Quint had also revealed that it had not shot the video, but they had obtained it from musician Sumit Roy. They had informed that the video was shot by Sumit, and they had published it with the permission of the musician and the man in the video.

Sumit Roy has been deeply involved with anti-CAA protests, who had visited the Shaheen Bagh protest site earlier also. He had also composed a song for the protests in collaboration with few other artists. The Artists Against Communalism at Shaheen Bagh which started on February 2 will continue till February 7, the day before Delhi votes for its assembly elections. A large number of artists are expected to attend the event in the coming days, which includes Prateek Kuhad, Peter Cat Recording Co., Lifafa, Shubha Mudgal, Aisi Taisi Democracy, Madan Gopal Singh, Saba Azad etc.