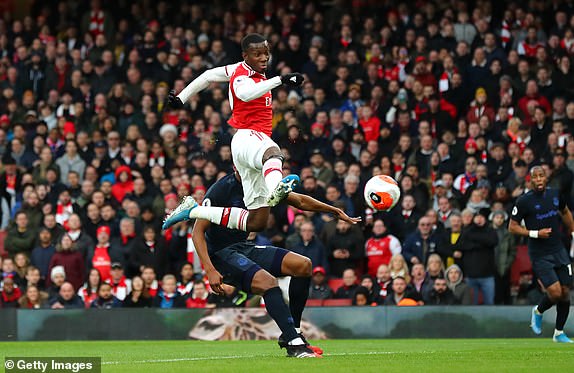 Arsenal 1-1 Everton, LIVE: Mikel Arteta’s men looking to use home advantage to leapfrog the Toffees in top half of the Premier League table

Arsenal host Everton at the Emirates Stadium in Premier League action as the Gunners hope to protect their unbeaten start to 2020 to end the weekend’s action.

Mikel Arteta’s side have started to climb up the table in recent weeks and hope a home win over the Toffees can enable a late push towards the top four.

But the Merseyside outfit are also enjoying life under new management in Carlo Ancelotti and also have sights on Champions League qualification for next season.

33min: Normal service resumed at the Emirates. David Luiz plays an easy through ball for Pierre-Emerick Aubameyang who after running in on goal slots past a rather helpless Jordan Pickford.

31min: Everton are rather hanging on now. Quite literally in Morgan Schneiderlin’s case as he is cautioned for holding back on a Gunners’ shirt.

30min: Arsenal are all over Everton again now. Jordan Pickford coming off his line to clear in an unorthodox fashion.

27min: Eddie Nketiah is not missing this one though! It’s a skilled close range finish from the striker, but what a cross this is from Saka out on the left. Never did you think he was in a position to be able to pick out a red shirt in the box as easy as he did there. Brilliant play. 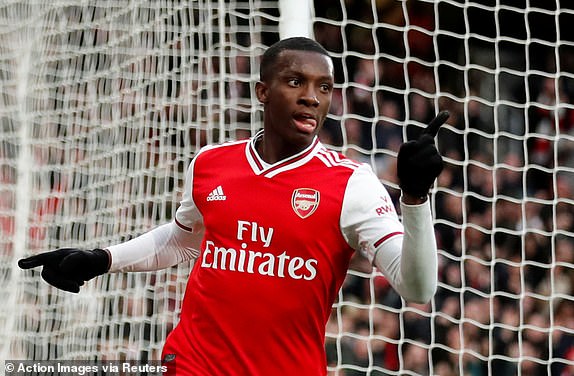 25min: The game has eased up in the last few minutes – not helped by the stoppage from Kolasinac’s injury. Eddie Nketiah fires over one end, Iwobi does likewise at the other. 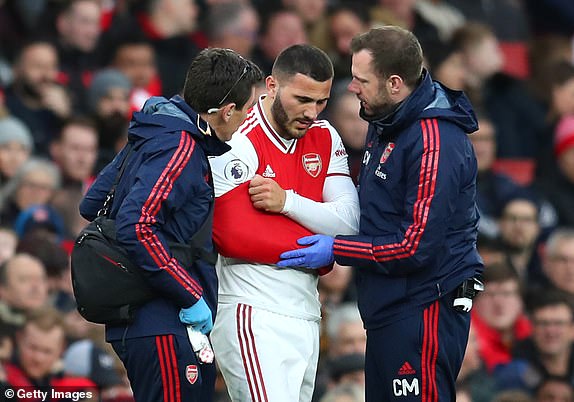 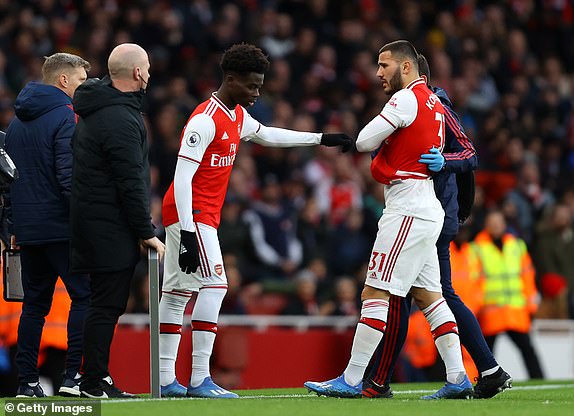 18min: Error from me. I though Kolasinac had picked up head injury but it is in fact his arm he has injured following a battle for a header. He gingerly walks off the pitch holding it, as he is replaced by Bukayo Saka. Expect around four additional minutes at least at the end of this half.

‘Don’t be fooled about Carlo Ancelotti being just a nice guy. Simon Hooper, the fourth official, has been harangued twice over decisions that should have gone Everton’s way – and given a death stare for good measure. To the naked eye, Everton are playing a yard quicker than before.’

16min: Stoppage in play as Sead Kolasinac is treated for a head injury following a battle for a header. He looks like he will continue but the Gunners medical staff are taking their time carefully with this.

13min: Good opening to this game. Pepe looks lively from a creative point of view as his corner kick is powerfully nodded over by Shkodran Mustafi.

10min: Everton are coming more into the game in the last few moments. Richarlison’s counter attack sees him find an unmarked Alex Iwobi out wide, but against his former side he can only fire off target across goal. 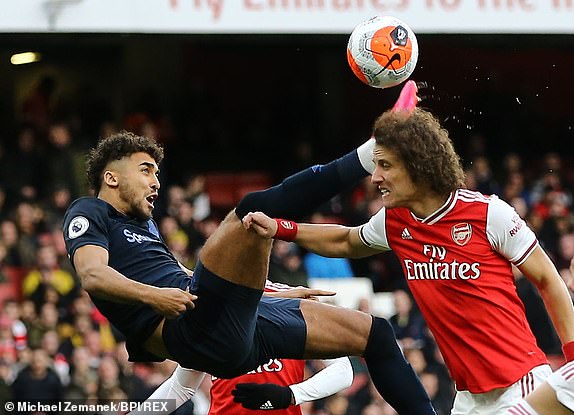 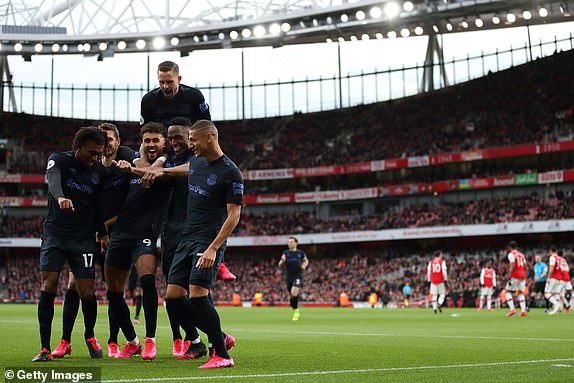 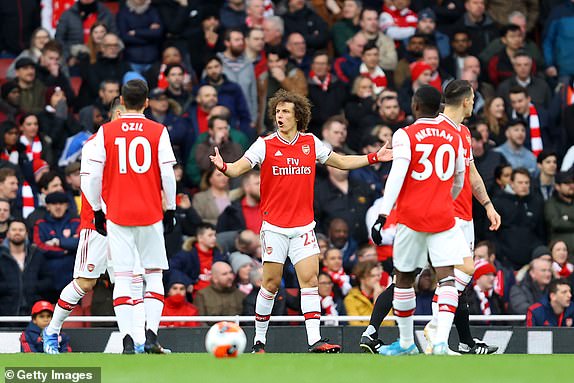 7min: Everton have just 83 minutes to hold on, and that won’t be nearly enough the way Arsenal are coming at them right now. Hector Bellerin fires wastefully over the bar from the edge of the box following a Nicolas Pepe cut-back.

4min: There has been a lot of praise for the way Arsenal have become more resolute at the back in the last few minutes, but that David Luiz error is as bad as anything they have served up in recent months. They are though dominating play now as they look for an equaliser.

1min: What on earth is going on in the Arsenal defence?! After just 49 seconds, David Luiz makes a total mess of a headed clearance following an Everton free-kick pumped into the box and it allows Dominic Calvert-Lewin to fire home acrobatically.

As ever these days, lots of empty seats among the home fans. 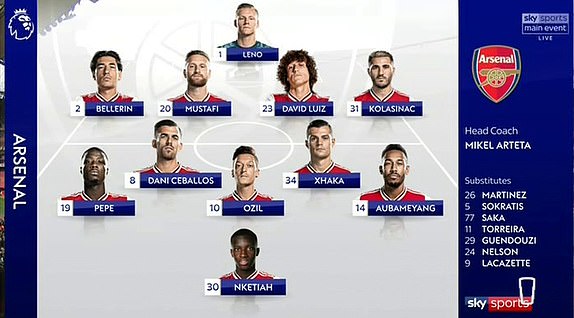 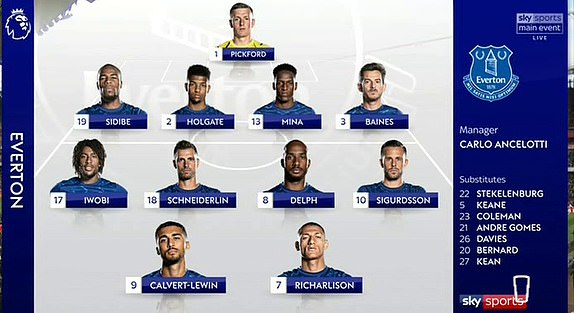 Updated of course following the earlier victories from Manchester Untied and Wolverhampton Wanderers. 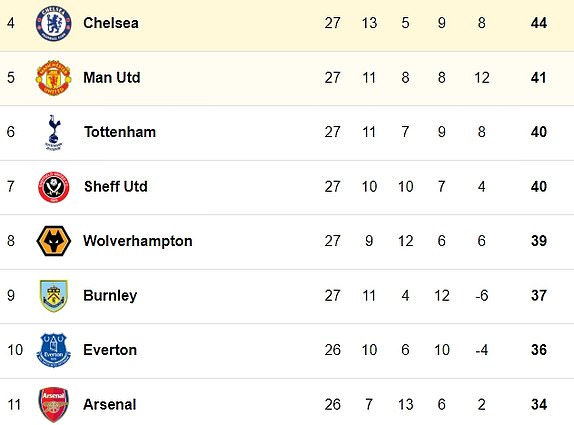 Wolves and Manchester United both walked away with comfortable 3-0 wins against relegation-strugglers Norwich and Watford.

PETER CROUCH: The poison has gone and the aura is back at Arsenal thanks to the influence of boss Mikel Arteta

On the final day of November, this column was devoted to Arsenal’s troubles.

It was in the middle of their bleak mid-winter and I wrote how their aura had disappeared and the club that used to be known for setting standards had allowed those standards to slip.

I have watched Arsenal consistently since that day, so the final act of last Sunday’s 4-0 win over Newcastle struck a chord.

PRE-MATCH READING: Carlo Ancelotti insists Mikel Arteta’s lack of managerial experience will not be a problem, as he has gained a lot of knowledge from Pep Guardiola

Carlo Ancelotti insisted Mikel Arteta’s lack of managerial experience will not prove a problem for Arsenal – because the schooling he got from Pep Guardiola matters much more.

The rookie Arteta is the youngest manager in the Premier League and Sunday faces the triple Champions League winner Ancelotti, who has spent two decades in charge of some of the world’s biggest clubs.

But the Everton manager feels his own time in the dugout for Real Madrid, AC Milan, Juventus, Chelsea, Paris Saint-Germain and Bayern Munich is far less important than the knowledge he has gained along the way.

And welcome to Sportsmail’s coverage of the Premier League action between Arsenal and Everton.

The league affair at the Emirates is the last of three games being played today with Manchester United in action against Watford while Wolves take on Norwich.

There’s only two points separating the Toffees and the Gunners while both remain in touching distance of Tottenham in fifth.

All the team news and build up to follow shortly…