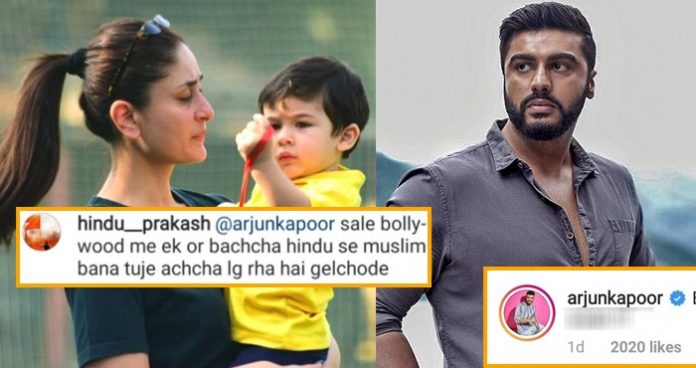 Actor Arjun Kapoor is one of the popular celebs on the Internet who is very sporty and active on the social platform. The actor even doesn’t mind to reply back the trollers’ inappropriate cause.

Social media is a direct platform where fans and follower got an exclusive chance to take peek of the glimpses of their favourite celebs. Arjoon Kapoor is one of the celebrities from B town who is very active on the social network. The ‘Namaste England’ actor shares a nice bonding with the actress Kareena Kapoor Khan. The ‘Good Newwz’ star Kareena recently shared an image with her little prince baby boy Taimur in her arms on her Instagram handle.

The actor Arjun Kapoor praised the little prince on the post in his comment and wrote, “The real nawaab 🤗”

The beautiful kid Taimur Khan genuinely attracts people and we can not stop adoring his cuteness. However, an Instagram user on Kareena Kapoor’s Insta handle raised a question to Arjun Kapoor by asking him about the religious issue about Taimur. The annoying user asked the actor whether he likes a Hindu kid becoming a Muslim.

The ‘Ki & Ka’ actor did not take this comment easily and thrashed the person with an appropriate reply. Arjun Kapoor replied,

(“Hey ****** what difference does it make whether he is Hindu or Muslim…when it doesn’t matter to his parents or to the people who know him then who are you to talk about Hindu or Muslim”)?

The actor Arjun’s reply supported by many users as his comments liked by many and were praised as well. Kareena Kapoor Khan and Arjun Kapoor worked in the film “Ki & Ka” under R. Balki’s directorial. Kareena Kapoor also shares a strong bonding with the Actress Malaika Arora who is dating Arjun Kapoor right now. Arjun’s cousins Rhea Kapoor and Sonam Kapoor are also a very good friend of Bebo.

‘Panipat’ star Arjun Kapoor did make a significant mark in the box office. He failed to amaze the audience in his last film despite the fact that it was based on the historic third battle of Panipat. He played the character of Sadashivrao Bhau in the film.

Arjoon Kapoor’s will be seen in his upcoming film ‘Sandeep Aur Pinky Faraar’ in opposite of Parineeti Chopra. The duo already appeared in the films ‘Ishaqzaade’ and ‘Namaste England’ together. For the pandemic of Covid 19, Arjun-Parineeti’s next film ‘Sandeep Aur Pinky Faraar’ release date has been postponed indefinitely which was decided to be released on 20th March 2020.

Brazilian President Jair Bolsonaro does this while seeking hydroxychloroquine from India