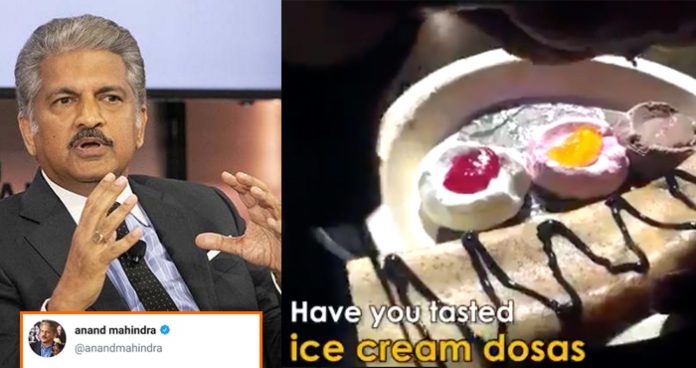 Dosa is one of the iconic dishes of India, which truly reflects the essence of South Indian culture. It is one of the most loved snacks and not just in South India, but people from most parts of India love eating Dosa. This dish has a separate fan base among Indians.

While many love eating Dosa with the exotic Sambhaar, the others love eating it with the delicious ‘coconut chutney’, but there are many people who like to eat Dosa only with the crispy potato filling in it. However, there are many outlets that have started serving ‘chocolate dosas’ or with ice-creams of different flavors.

Well, as horrific as it may sound but some outlets and street vendors are doing exactly that. Even the thought of it will make a true Dosa ‘lover’ cringe let alone eating it. 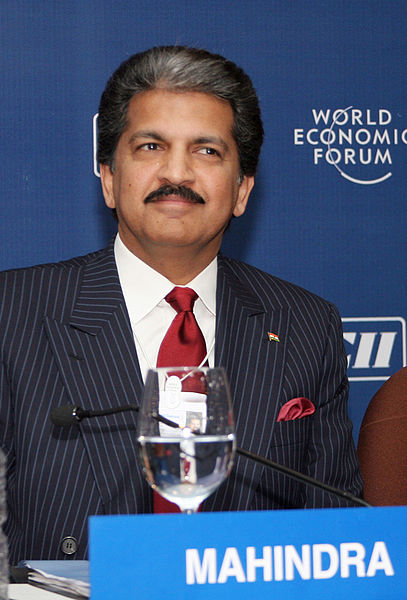 Recently, the chairman of Mahindra Groups, Anand Mahindra took to his Twitter and made a tweet about a Bengaluru street vendor who is serving Dosa with ice-creams and chocolate syrup. Anand Mahindra shared a video of the same via his official Twitter handle. Praising the food vendor, Anand Mahindra wrote:

“Not a fan of ice cream dosas, but full marks to this gentleman’s inventiveness. In fact Indian street vendors are an inexhaustible source of innovation. All the product design teams in our Group should regularly visit vendors & draw inspiration from them! #whatsappwonderbox”

Not a fan of ice cream dosas, but full marks to this gentleman’s inventiveness. In fact Indian street vendors are an inexhaustible source of innovation. All the product design teams in our Group should regularly visit vendors & draw inspiration from them! #whatsappwonderbox pic.twitter.com/G65jg70Oq5

While Anand Mahindra was all praises for the street food vendor, on the other hand, Twitterati were shocked after seeing the state of their favorite dish and came up with hilarious reactions to the tweet of Anand Mahindra and are slamming such good vendors who are ‘disrespecting’ Dosa by experimenting with them.

This is disrespect to dosa period.

Such rude behaviour wd Dosa( on of best cuisine in world) should b punished ????

Sir we all had jam and sugar with dosa. But they are not dosa but pan cakes. This also.
Ice cream dosa and any other types of designer dosa is a disgrace to the traditional dosas

being a madrasi this is pure horror. how can dosa and ice cream even be on same line, leave alone together?