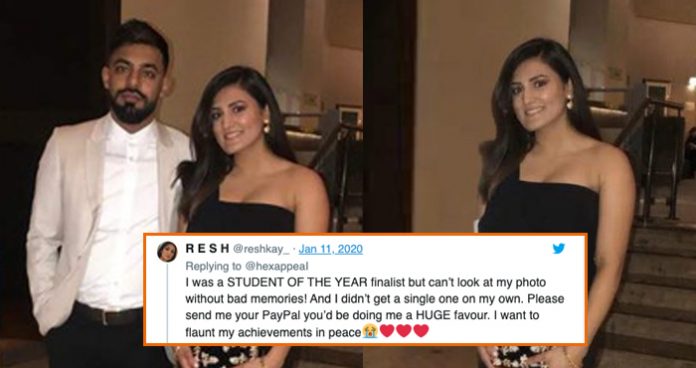 Ever wanted to remove your Ex’s picture from a memorable moment? Because when a beloved become an Ex, they may not turn into your enemy, also not in your friend list anymore. Remains as a stranger with some memories, which you do not want to cherish anymore! Specifically, when you want to keep a photograph from your favourite memory but without the Ex in it like a joyful trip, Graduation day, with your pet or from a get-together image. Well, there is no magical delete option to get the job done, all you got to do is to ask @hexappeal to get your job done for a perfect Ex removal photo.

Hexappeal offering the service of removing Ex from a photo to the followers from tweeter account. This post got a huge response in no time after posting the sample work of before and after images. @hexappeal is an artist and make-up enthusiast and her post of Ex removal retweeted 18,500 times, 162,000 likes, over 19,000 replies. With these amounts of response, the tweet post went viral on the platform.

for $10 i will edit your ex out of your photo serious inquiries only pic.twitter.com/QDLfNlb86u

With the post @hexappeal wrote, “for $10 i will edit your ex out of your photo serious inquiries only”.

Here are some of the satisfied clients with after images.

Guys she really killed it pic.twitter.com/5GzzR3FNx7

It seems this client is pretty satisfied with the after-image without her Ex in it.

Following user expressed his feelings of spending the best of $10 for the cause.

Best $10 I will ever spend pic.twitter.com/8uadVOyOey

She did the damn thing ???? pic.twitter.com/9N3NUQkCOD

my prom pictures are with my ex best friend AND my ex and they both dating now…how many prom pics can you photoshop for $10?

He looks like he never belonged in the picture to begin with, LOL! For an additional $5 you should edit her potential “next” ????.

Tbh… he almost looks photoshopped into the pic..

The dog look photoshopped too lmao

I’ll do it for $1 pic.twitter.com/DVKZRmwJdP

Meanwhile, a Twitterati even edited the given images with her expertise for this work.

No sure if I got the right guy ???? pic.twitter.com/MAxLlkauaN

I’m trying my best ???? I’ve been there before so I just want to help anyone I can out!