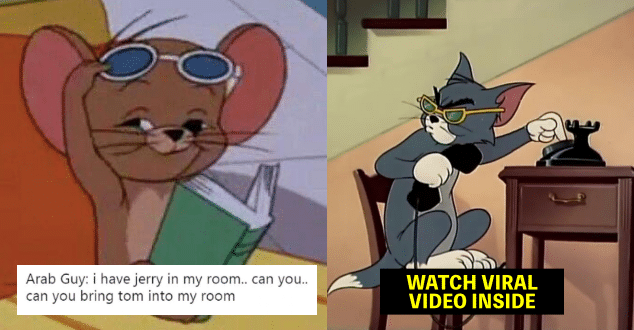 
Do you ever fumble at any point when you just don’t recall some word or phrase ? A similar incident happened at the UK ,when a guest in a hotel did not recall the name of mouse .

Recently, an Arab guest tried to explain the staff at his hotel that there’s a mouse in his room, when he just missed out the name of the little fellow. He made a complaint about ‘Jerry’ in his room .

Well!!! who doesn’t know the Jerry from Tom and Jerry.

When this conversation happened , just got viral within no time and taking rounds on internet. Let’s have a look at the funny incident :

Initially , the hotel staff was confused about the problem which the Arab guest was facing but soon the executive was able to understand .

Also the line “bring Tom“was the icing on the cake and it actually was hilarious.

Netizens gave their funny reactions to the video , let’s have a look:

What you guys have to say about this ? Feel free to share your thoughts..