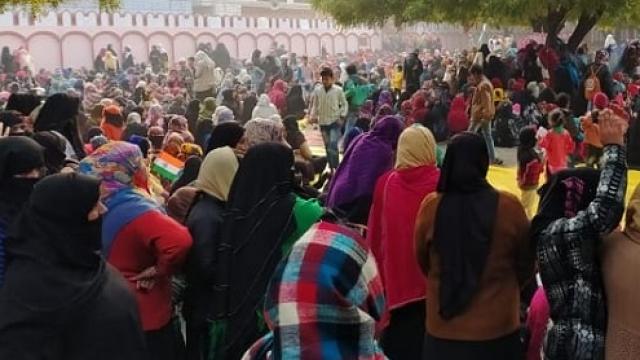 Muslim women have been protesting against the CAA and the NRC at the Shajmahal Eidgah area in Aligarh. As per reports, after the protests inside AMU campus pacified and prospects for local political leaders to gain mileage there started dwindling, they had shifted their focus to the Shajmahal area.

Yesterday these Muslim women protestors who have been agitating here since January 29, resorted to continuous sloganeering, raising ‘Azaadi slogans’ and anti-government, anti-CAA slogans, after offering ‘dua’ at the Shajmahal Eidgah post the afternoon Namaz and Quran Khawani.

According to a report by Live Hindustan, while sloganeering they also vowed to continue the agitation and protest against the central government until the newly Citizenship Amendment law was withdrawn. They claimed that they wanted the Central government to realise that implementing CAA was a big mistake on their part. They spoke of sending out a strong message to the central government through the Delhi poll results.

This series of intermittent sloganeering continued till midnight. Some students of the Aligarh Muslim University also appealed to the women here to cooperate until CAA is not withdrawn and continue protesting with the common cause.

For security, PAC and RAF were also deployed in addition to the police of several police stations including Dehli Gate. According to an Uttar Pradesh senior administrative official, there was no doubt that those protesting here were the product of the same anti-government lobby that is leading and funding the Shaheen Bagh protest in Delhi. He also said that the police are keeping a close watch on these protesters to ascertain their links with anti-national elements.

On the other hand, a large number of protesting ‘students’ of AMU, took out a Constitution March on Saturday (8 February) in protest against the citizenship law. The ‘students’ ended the march after reaching the Bab-e-Syed Gate in Uttar Pradesh.

Aligarh Muslim University (AMU) in Uttar Pradesh had emerged as one of the epi-centres of the anti-CAA agitations.

Read: Shaheen Bagh mob robbed, assaulted and tried to convert Gunja Kapoor into Islam for wearing a burkha, wanted to use as hostage to negotiate with the BJP

On January 31, former AMUSU vice president Sajjad Subhan Rather had arrived at the protest venue in Shajmahal area to incite the women. He demanded a tent to be placed and a stage to be set so he can deliver a speech there. The local police refused to provide permission and this reportedly led to a verbal spat between Sajjad’s supporters and the police.

Amidst the situation, rumours were spread that Sajjad may be arrested by the police. Fearing arrest, Sajjad then went among the women and borrowed a Burkha to cover himself and pass off as a woman protestor.

As per reports, Sajjad’s supporters started spreading the rumour that he may be arrested and called students of colleges to arrive in large numbers in the area to protest against the police.

As per reports, Sajjad then shared a live video through Facebook and called other AMU students, including another AMUSU leader Salman Imtiyaz. Later, with the help of the gathering students, he slipped through the back entrance of the protest venue.

Reports have stated that the police have registered a case against over 250 people present at the protest venue for inciting violence.

The Shajmahal protests were initially being led by female Muslim students. However, after the Friday prayers, hundreds of male students had flocked to the venue.