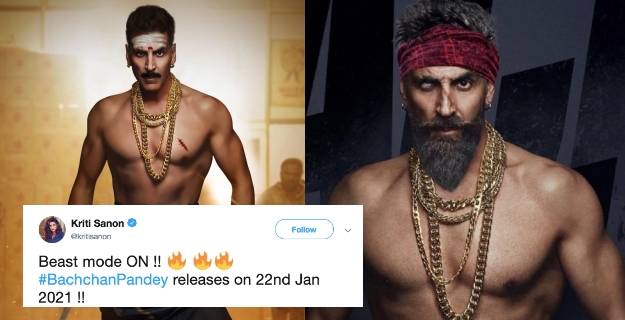 Whoa. Akshay Kumar in Bachchan Pandey’s new poster will indeed make you do a double take. The 52-year-old actor shared a brand new poster, featuring himself in the persona of the titular character, to actually announce a new release date of the film.

Firstly look at the first poster of the movie which was released in July last year. Akshay looked totally fierce in that traditional black lungi and heavy gold chains.

In the new poster, Bachchan Pandey appears to have come a long way, battling hurdles along his journey – in a sharp contrast to the first poster.

Akshay’s character is seen in a very rugged avatar with a full-grown beard, a bandana, a scarred eye, and a few gold chains, which contradicts his previous look entirely. However, certain remains unchanged – his aggressive stare and intense expression.

As soon as the new poster was revealed, people started appreciating him for his look and some even called it ‘bhayanak’.

Bachchan Pandey is the Hindi remake of Tamil film Veeram Veeram in which a kind-hearted villager takes down the enemies of his fiancee’s father, to safeguard their family. In the film, Akshay will be seen romancing opposite Kriti Sanon.

Akshay Kumar shifted the release date of his film to ensure an uninterrupted release of Aamir Khan’s Laal Singh Chaddha. Both films were initially supposed to hit screens on Christmas this year but now, Akshay’s film will release a month later on January 22, 2021.