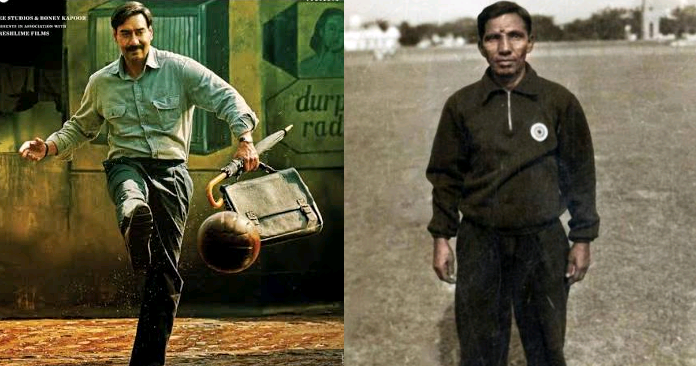 Ajay Devgn is famous for his intense acting and finally, he is portraying a character role in his upcoming Movie Maidaan. Maidaan is a period sports film that is inspired by true events. He is essaying the role of Indian Football Coach Syed Abdul Rahim in his upcoming movie.

Syed Abdul Rahim is famous for his coaching skills in
Football that lead team India to the semi-finals of the 1956 Melbourne Olympic
Football Tournament. He has given several nicknames throughout the years for
his charismatic work for the Indian Football team like the architect of Modern
Indian Football, Rahim Saab, The Stan Cullis of India, Rahim Saab, and The Indian
Ferguson.

Here we list some unknown facts about Syed Abdul Rahim that might help you to know how this new movie of Ajay Devgn would look like and what you should expect from the movie.

1. Smoking and drinking habits – It is said that an Athlete shouldn’t smoke or drink in order to maintain his health. However, Syed Abdul Rahim used to smoke but nobody sure whether he used to drink as well or not.

2. Favorite game – Syed Abdul Rahim loves to play football since his very childhood. He was fascinated by football and develop some amazing football skills at such a young age. He is also good at academics but used to participate in most of his sports events of the school.

3. Attraction towards Football – In the 1920s, the football culture came to Hyderabad that becomes the center of attraction for a lot of youngsters including Syed Abdul Rahim. Later on, he continued with the football playing and played football matches for the Osmania University football team.

4. Career Decisions – Syed Abdul Rahim started his career as a school teacher but never left his first love that was to play football on the field. He was considered as one of the best players of Hyderabad for the next 20 years from 1920 to 1940. He used to play for the ‘Qamar Club’ which is also counted as one of the best teams in Hyderabad’s local league at that time.

6. A Genius Coach
– Syed Abdul Rahim was a genius coach and much ahead of his time with his
skills and game-knowledge. He had the ability to spot raw talents and then
bring the player out of him. He used to follow strict discipline, and often
give pep talks to his students.

His tactics, bunch of motivational speeches, far-sightedness had played a huge role in order to produce a heavy chain of footballers. He has a fair share in the process that had to change the attitude of a man towards the game, and further improve the infrastructure of football in Hyderabad.

7. The passing technique
– Indians also used to play football in a typical British style before Syed
Abdul Rahim brings new playing skills. When Rahim joined the Hyderabad City
Police commonly known as HCP or City Afghans in the year 1943, he had
introduced the concept of passing the ball from one player to another instead
of just dribbling.

Furthermore, he was focused on being ambidextrous which
means the ability to play with either foot. IT helps the players to sharpen up
their reflexes, stamina, speed, techniques, and football skills. He used to
organize customized football tournaments for the youngsters so that they can
enjoy football.

8. National fame – In the year 1950, he became the coach of the Indian National football team. He managed the Indian team in the 1951s Asian Games and in the 1952s Olympic Games. It is because of his coaching that the year 1945 to 1965 are considered as the Golden Era of Hyderabad Football.

9. The Biopic –
Ajay Devgn is all set to recreate the 60s era where he will try to fit into the
shows of Syed Abdul Rahim. The movie is directed by Amit Sharma.