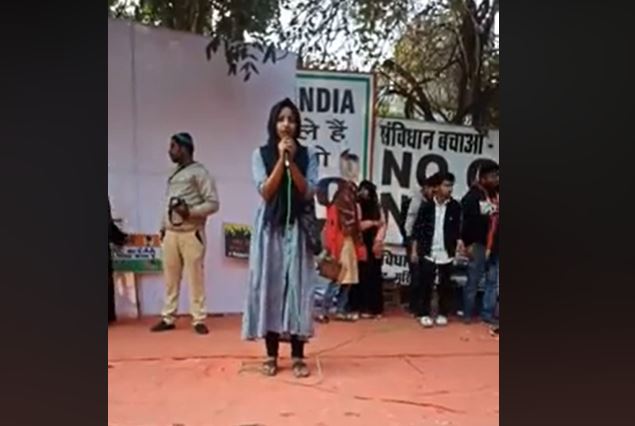 Notably, Afreen Fatima is the same Jawaharlal Nehru University (JNU) student leader, who, in a viral video shared on Twitter recently, was seen spewing venom against the government as well as the Supreme Court. She was seen challenging the integrity of the country’s highest judicial body by raising doubts over its crucial decisions like that on Ram Mandir and hanging of terrorist Afzal Guru.

In a 45 sec video posted on Twitter by user @knewschannel on January 25, 2020, the JNU student had tried to instigate the crowd by saying that while protesting against CAA and NRC they have realised that neither the government nor the Supreme court is worthy of their trust.

JNUSU Councillor Afreen Fatima had also vociferously spoken in favour of Sharjeel Imam who had made calls for North East India to be cut off from the rest of the country when the Union had condemned his arrest and labelled it a case of ‘Islamophobia’. JNUSU claimed that the BJP wants to ‘criminalize’ Muslims. The radical Islamists had taken to Twitter to trend ‘ReleaseSharjeelImam’ after he was arrested by Delhi Police over his seditious speech.

Sharjeel Imam, the Shaheen Bagh mastermind and columnist with The Wire, was arrested from his ancestral home in Bihar by Delhi Police earlier in the day. Delhi Police had filed an FIR on Sunday against Imam, who is also a columnist with leftist propaganda website The Wire, under IPC section 153 for giving provocative statements with intent to cause riots. Earlier, Assam Police had registered a case under the Unlawful Activities (Prevention) Act against Sharjeel Imam. The UP police were also hunting for Imam for a speech made in Aligarh Muslim Univerisity.