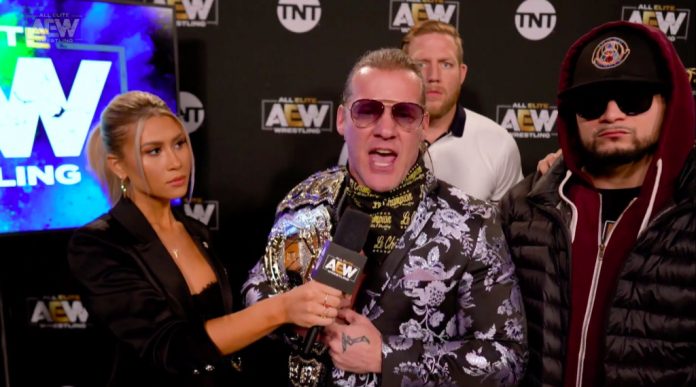 1. AEW Tag Team Championship Match: Kenny Omega and Hangman Page (c) defeated SCU. The champions retained after hitting a combination Buckshot Lariat and V-Trigger on Kazarian. After the match, a big brawl broke out involving the Dark Order, Best Friends, the Hybrid 2, The Butcher and The Blade, and the Young Bucks. The Bucks stood tall at the end, taking everyone out with dives.

– Jim Ross had a sit-down interview with Santana about Jon Moxley poking out his eye last week.

2. Dustin Rhodes defeated Sammy Guevara with the Final Reckoning. After the match, Rhodes told Jake Hager to stop collecting a paycheck and challenged him to a match at Revolution.

– Tony Schiavone interviewed Britt Baker about what she did to Yuka Sakazaki’s teeth last week. Britt said the tooth needed to be pulled and she graciously did so for free. She then insulted the crowd for having “chubby, Whataburger faces.”

3. AEW Women’s Championship Match: Nyla Rose defeated Riho (c) after a spear and a Beast Bomb to win the championship. After the match, Rose went backstage and talked trash to Kenny Omega and most of the AEW women’s division.

– Chris Jericho reveals that he’s enlisted Jeff Cobb to take out Jon Moxley on behalf of the Inner Circle next week.

4. MJF defeated Jungle Boy. MJF used his diamond ring to knock out Jungle Boy, then hit him with the Double Cross to win the match.

– Next week’s episode will include Cody vs Wardlow in a steel cage, Omega and Page defending the Tag Team Championship against the Lucha Bros., a number one contender tag team battle royal, and Jon Moxley vs. Jeff Cobb.

– Another video package/promo for PAC aired. PAC and Kenny Omega face each other in a 30-minute Iron Man Match in two weeks.

5. Jon Moxley defeated Santana. This turned into a blindfold match in its closing moments, and Moxley won with the Paradigm Shift. After the match, the entire Inner Circle, including the debuting Jeff Cobb, beat down Moxley.