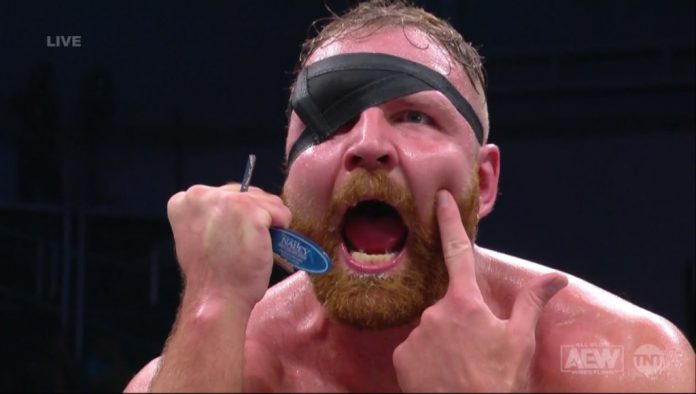 Last week, viewership numbers for both AEW Dynamite and NXT were down, but AEW maintained its lead in those numbers. This week, both shows had bigger things going on, with Cody Rhodes taking his lashes from Maxwell Jacob Friedman on Dynamite, while Charlotte Flair showed up on NXT to answer Rhea Ripley’s challenge (although of course she was beaten down by Ripley and Bianca Belair before she could really answer anything).

So perhaps it’s not surprising that this week, both show’s numbers were up, according to Showbuzz Daily.

Last week, Dynamite was ranked uncommonly high among cable shows in the demo, but this week it dropped from 3rd to 11th place. NXT went up slightly in those rankings, from 37th place to 34th. The cable rankings were understandably affected by the impeachment coverage that was all over the news stations.

The simplistic takeaway here would be that Cody Rhodes getting whipped and Jon Moxley working in an eyepatch add up to more of a draw than a Charlotte Flair appearance, but obviously there are a lot of factors affecting what wrestling fans watch. For one thing, people have probably noticed that AEW mostly does what they advertise they’re going to do (even if it’s a man being whipped in the main event slot), whereas when a WWE show advertises in February that they’re going to set up a match for WrestleMania, that’s probably just going to get kicked further down the road.