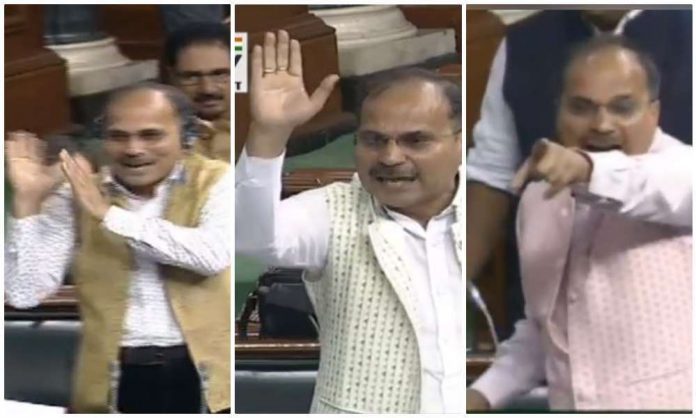 The Congress party has been bowling full toss after full toss at Prime Minister Modi in recent weeks. In his reply on the floor of the Lok Sabha, Narendra Modi decided to hit a couple of them out of the park. Leader of the Congress party in the Lower House Adhir Ranjan Chowdhury and its former President Rahul Gandhi were targeted by the Prime Minister during the course of his speech.

Adhir Ranjan Chowdhury is a motormouth who frequently lands in trouble due to his words. There is hardly any pertinent issue on which the Congress party hasn’t made an outrageous remark. In the matter of NRC and CAA, he has called Narendra Modi and Amit Shah illegal immigrants. On the matter of the abrogation of Article 370, he claimed it was an international issue. And during his speeches in Lok Sabha, Adhir Ranjan makes complete use of the entirety of his body to make his point.

Amusingly, Chowdhury has a habit of making wild hand gestures while speaking in the Lok Sabha.

Following abrogation of Article 370, Chowdhury had questioned whether Kashmir is an internal matter or an international issue. His wild hand gestures make it appear like he is campaigning for Fit India movement.

The scion of the Nehru-Gandhi Parivar had said on Wednesday the youth of the country will hit the Prime Minister with ‘Danda’ (sticks). Narendra Modi raised the matter in the Parliament on Thursday and said that he will do more Surya Namaskar to “make my back even stronger to face abuses”. He said, “In any case, I have been abused so much for the past two decades, their negativity hardly matters.”

I heard an Opposition MP saying- we will beat Modi with sticks in 6 months.

I have also decided- will do more Surya Namaskar. This will make my back even stronger to face abuses. In any case, I have been abused so much for the last 2 decades, their negativity hardly matters: PM

During the course of his speech, Rahul Gandhi rose to make an intervention. Prime Minister Modi responded saying, “I was speaking for the last 30-40 minutes but it took this long for the current to reach there. Many tube lights are like this.” Narendra Modi spoke on various matters during his speech. He spoke of how Kashmir is being developed and he also spoke out against the politics of hatred being played in the country.