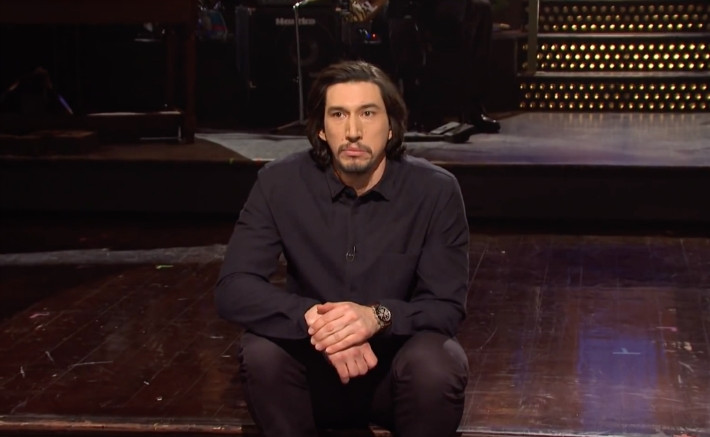 “I have to say I’m a little sad to say goodbye to 2019 because I’ve acted so much and so hard,” Driver said. He won acclaim for his role in Netflix’s Marriage Story and also had a huge pop culture moment in Star Wars, and Driver admitted that there was a lot of noise in those performances.

“I was yelling, I was crying, I punched, I sang. All four emotions,” Driver said, pointing out that people think he’s just his character from Girls or Kylo Ren from “that space one.”

He did admit, however, that he was known for some pretty intense roles and wanted to let people know that he’s very chill, using the monologue to play some calming music and just… riff a bit.

“I’m not an intense guy, I’m actually very chill,” Driver said, asking for some calming music and after a bit of a delay, wandering into the audience to hand out a Kylo Ren action figure.

“If I find that on eBay I’ll kill you,” Driver said.

The riffing worked pretty well: Driver joked that he was vamping to kill time because there was a sketch at the end of the night that he was trying to force getting cut for time. He also had another SNL-specific joke at the ready.

“I was in a movie with Scarlett Johansson,” Driver said. “So I basically kissed Colin Jost if you think about it.”

The music made it seem like the cold open might be a fully musical one, but maybe he’ll work his way up to that after some more chill acting in the next few years.