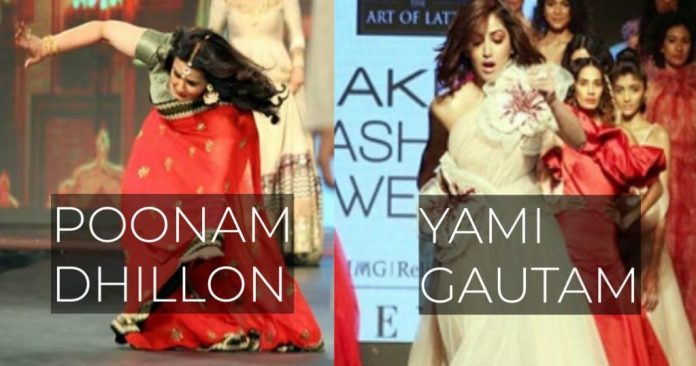 It is very common to see Bollywood celebs doing ramp-walk in
various fashion shows. The entertainment industry is whole connected and some
of the designers got actresses as top models for their fashion shows.

The thing you might not aware of it that Ramp walk looks easy as it is just walking in the given space, but it is very difficult if you want to know the truth.

Ramp walk is as difficult as to perform any task because the simple walking involves high heels, awkward dresses, and great confidence to face the crowd and camera.

This can be done by people of the glamor industry or these models who have dreamt of doing this entire life. But these high heels or mere luck make them ashamed in front of a huge audience as well as the camera.

There are many incidents when these queasy models slipped during their ramp-walk due to high heels or dresses.

However, these actresses and models show their hundred percent commitment and finished their ramp walk by standing again.

Today, we discuss these Bollywood actresses who slipped during their fashion ramp walk but finished their walk anyways.

Yami Gautam is better known for her TV commercial Fair & Lovely. She is a good actress and her notable works include Vicky Donor, Sanam Re, and recently released Bala.

However, during the Lakme Fashion Week 2019, this gorgeous actress was struggling with her ramp walk dress.

The camera capture that she was slipped during her walk on
the ramp and she somehow managed to balance herself.

Kangana Ranaut has done a whole film that highlighted the fashion industry of these ramp models. I think she knows this better and she also encountered a similar moment during one of the fashion shows.

Kangana managed to balance herself from slipping during the
fashion show that was organized for the designer Namrata Joshipura. However,
her slip moment was caught by the camera.

Sonakshi Sinha often has seen in fashion shows doing ramp walks. However, there’s one incident caught on camera during the Blenders’ Pride fashion show where she slipped as her long gown came under her gown heels.

Luckily she managed to stay in position after that little stumble.

There are many moments caught on camera when she slipped and managed to balance somehow, but she completed her walk every time.

A similar moment had happened in one of the fashion shows where she called her mother on stage to get help with her dress.

Poonam Dhillon has faced one of the most embarrassing moments during her fashion ramp walk.

She slipped badly on the stage but she rose again and completed her ramp-walk with the same confidence. She was doing that ramp walk for the Vikram Fadnis.

Sridevi is one of the finest Bollywood actresses we ever got. It is expected that she can be the charm of any fashion show with her presence.

In the year 2010, she was doing ramp walk for designer Neeta Loola. Well, things were about to turn bad as Sridevi was struggling with her gown and about to slip during her walk.

She somehow managed to balance herself and saved herself
from embarrassment. However, you can see a glimpse of that moment in these pics
and online available videos of the fashion show.

Little you know that the famous Bollywood singer Sona Mahapatra had attended the Lakme Fashion week as a model.

While delivering her performance on the stage, she fell because of her lousy dress. However, she rose again with the same confidence and completed her performance.

During a fashion show held in Dubai, the popular actress from South Indian movies named Parvati Omankuttum embarrassed herself badly by falling on the stage.

She slipped during the performance because of her high heels as she lost control but she didn’t lose her confidence and completed her walk.

However, the moment was captured in the camera and often discussed whenever people talk about fashion shows and ramp walk.

Did we miss something that should be included in this list?