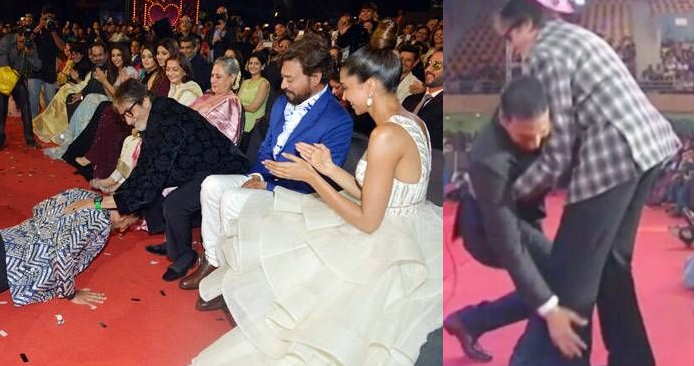 Hey Readers, Welcome back to Desi Humor. India is all known for its culture and values. We believe in giving utmost respect to our guests and elders. Where people say the youth is very much influenced by western culture and is leaving behind Indian values, there are still youngsters who appreciate and follow their rituals and ethics.

When it comes to Bollywood, there are many of our favorite celebrities who still preserve Indian ethics. Celebrities who didn’t let fame overpower their culture. Where many people feel slight awkwardness in touching feet of elders at events or outdoors, these celebrities miss no chance to seek blessings.

Here is a list of celebrities who bow down and touch the feet of their elders showing love and respect towards their culture.

The chocolate boy of the industry has no less of name, fame, and money. Yet, he didn’t let all this overpower his ethics and values. He gives due respect to his elders. Instead of giving formal hugs and handshake, Ranbir bends down to touch his elders’ feet and seel all their blessings.

Everyone is familiar with the patriotic side of Khiladi Akshay Kumar. His films have done absolute justice to the Indian Army and he also makes a feasible contribution towards them as a gesture of thanksgiving. Akshay is very much attached to his roots. And maybe that’s the reason wherever he meets an elderly person, he bows and takes the blessings.

The major reason behind Ranveer’s success is his originality. He connects with the audience quite comfortably. He never makes anyone feel the societal differences rather makes them feel homely. It would be unfair if we don’t count his way of greeting elders. He feels no hesitation to touch the feet of his elders. And he proudly does that despite the location or event factor.

Kapil has raised to this success from a very casual and simple Indian family. Where people expect fame to change such people completely, Kapil has slapped such negativity with his genuine ethics. Every time he invites stars who are elder than him to his show, the first thing he does is to get down to their feet and take their blessings. This is also a lesson to civilians who believe such things will lower their image.

The very humble Salman has always worked for the welfare of individuals. His charity being human is a great help to needy. Respecting elders and touching their feet is a part of his humble gestures. He treats his elders cordially and with all hearty respect. We definitely need to follow this gesture of him.

King Khan or Badshah of Bollywood has got a million reasons to be proud of himself and stay on the seventh cloud. But nothing did ever take over his ethics. He never thought any of his elders to be below him. Very kindly, he touches their feet and gives them all the respect they deserve. This shows how humble and down to earth personality he is.

The Indian holy books have already mentioned the values to be followed with accurate reasons behind them. And these successful celebrities do justice to it. They show if we are blessed by our elders, we surely will be happy, satisfied and successful. We should adopt this behavior and respect every higher aged person in our family and society.