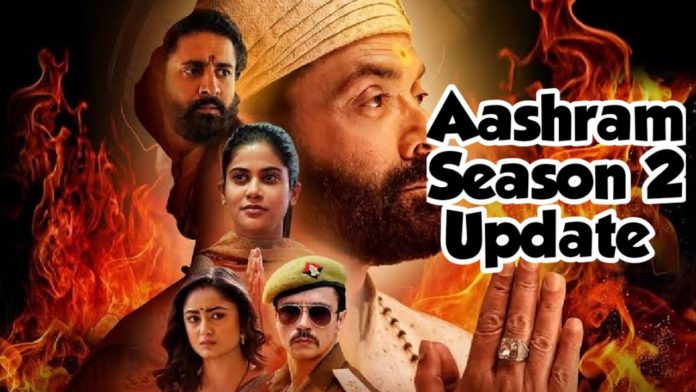 Aashram Part 1 / Season 1 ended in a cliffhanger moment with Babaji trying to persuade Babita to be a part of his inner circle or else suffer the fate of others who didn’t obey him. Bobby Deol’s performance as Baba was very convincing and at the end of Season 1 it was revealed that Aashram Part 2 / Season 2 will be released soon.

A small teaser was put up at the end of season 1 of Aashram where it shows Babita taking up Baba’s offer and continuing her illegal relationship to gain power and freedom. Tridha Choudhury as Babita has given a convincing performance though we get disheartened by her deeds her performance is overall appreciated.

Aashram Season 2 is expected to release in March 2021, though the official date is not announced by Prakash Jha or his team. They wanted to see the response of Aashram Part 1 / Season 1 before deciding on releasing the Part 2.

Season 2 of Aashram will again revolves around Baba (preacher) known as ‘Baba Nirala.’. This season will focus on the truth unravelling about Baba’s past and how he became this well known Baba from a simpleton. Pammi will also have a huge role to play in Part 2 of Aashram Meanwhile, Darshan Kumaar, the actor seen in ‘Mary Kom’ and ‘NH10’ before, is a cop in this series. Furthermore, he is adamant about unraveling the truth behind the skeletons and dead bodies recovered from the Asharam’s property. It seems to be a murder mystery.

Here is a small teaser of Aashram season 2

Big Mouth Season 4 Ending Explained: What to expect from Season 5?