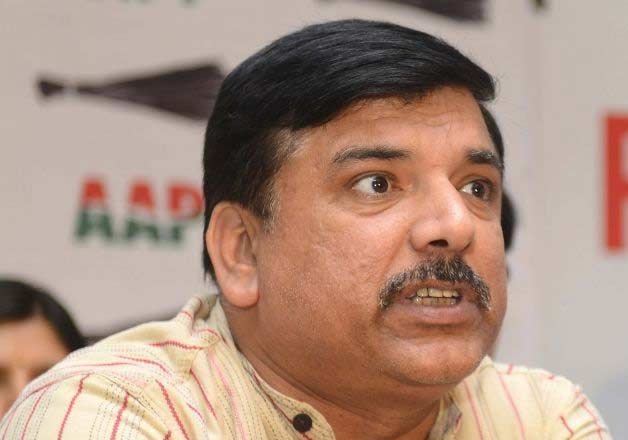 The Delhi elections have finally concluded and the Exit Polls show a thumping majority for Aam Admi Party. Exit polls have predicted that while BJP may increase its tally, AAP is set to sweep the elections hands down. However, in a strange turn of events, AAP leader Sanjay Singh on Saturday, after the predicted win of AAP, alleged EVM tampering in Delhi by sharing some videos on Twitter.

“Does the reserve (forces) not go with the EVM? This official was caught with an EVM by people at Saraswati Vidya Niketan School in Babarpur assembly constituency,” tweeted Sanjay Singh.

Right after the Exit polls and the reported surge in voting post 4 PM, Sanjay Singh, meeting AAP supremo Arvind Kejriwal said, “EVMs that should be taken directly to the strong room after getting sealed, are still with some officers. It is an incident of Babarpur. A similar incident is being reported from Vishwas Nagar”.

AAP’s Sanjay Singh after meeting at Delhi CM Arvind Kejriwal’s residence on security of EVMs: EVMs that should be taken directly to strong room after getting sealed,are still with some officers. It is an incident of Babarpur.A similar incident is being reported from Vishwas Nagar https://t.co/njPcQ8yyZS pic.twitter.com/U13rLRDa5H

It is rather interesting that AAP would allege EVM tampering when the Exit Polls show an AAP sweep. Either AAP itself does not believe that it could win with those numbers, or they are covering their base just in case the surge in voting results in BJP bettering their tally.

The Election Commission has refuted these baseless allegations.

EC has said that all the EVMs used for polls have been sealed in front of the party agents and have been brought to the strong rooms directly from the polling stations.

“All EVMs that were used for the polls have been accounted for. EVMs have been stored safely with police protection in centres and party agents are also allowed to stay outside the centre if they wish”, an EC official has reported having said.

Following up on their allegations of EVM tampering, AAP has also started fear-mongering and raising questions on the EC. It has asked why the voting percentage hasn’t been released and ‘what is cooking’ behind the delay.

Absolutely shocking. What is EC doing? Why are they not releasing poll turnout figures, several hours after polling? https://t.co/ko1m5YqlSx

Why is the Election Commission not releasing voter turnout figue? pic.twitter.com/jurrKr5QH5

AAP’s shenanigans with the EVM are not new. One recalls how Saurabh Bharadwaj, the AAP MLA had conducted a grand show of ‘hacking an EVM’ by opening and playing with a toy prototype machine inside Delhi assembly. The MLA, whose affinity towards science fiction was confirmed when he had blamed the death of homeless persons in Delhi on intoxication rather than the coldwave, had then decided to go global. He had Tweeted that he had met the opposition leader of a country called ‘Bostwana’ (Botswana) and assured them that he will help them prove the vulnerability of EVMs in their highest court.

Blaming EVMs for every lost election has become the easiest excuse for political parties. Despite the ECI explaining multiple times that tampering is not possible in EVMs, political parties never miss an opportunity to raise questions over a constitutional body and undermine the public mandate, insulting the very ethics of democracy bitterly every time the results are not in their favour. A few vested interests have even tried to propagate the idea internationally and insult India’s firm democratic system.

A number of countries have shown interest in purchasing and adapting India’s EVMs into their national elections. The ECI has already announced that all commission will ensure 100% coverage under VVPAT (Voter Verifiable Paper Audit Trail) to ensure transparency and reliability.